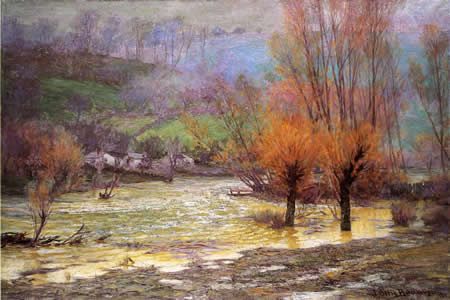 John Ottis Adams, often referred to as “J. Ottis Adams”, was an Indiana painter, generally known as an American Impressionist, who studied in London at the South Kensington School of Art and in Germany at the Muinch Academy.

Traveling to Europe to study was not uncommon for American artists in the late 1800’s, and Adams was one of a number of them who came away impressed with the European avant-guard painters of the time, i.e. the Impressionists.

On his return, Adams settled in Muncie and devoted himself to the portrayal of the landscape of Indiana, as well as painting the lake area in Michigan, where he vacationed, and Florida, where he wintered.

Adams helped to found and became an instructor at he Herron Art School, now the Herron School of Art and Design in Indianapolis.

He was a member of the Hoosier Group, along with painters William Forsyth, Richard Gruelle and Theodore Steele; and he and his wife shared a house called The Hermitage in Brookville, Indiana with Steel and his wife. The area was a focal point for the group and the artists thought of it as the Barbizon of Indiana.

The work for which he is best known is brighter and dappled with the textures of impressionist brushstrokes, though Adams generally preferred a more reserved and naturalistic palette than the European Impressionists and many of their American counterparts.

I particularly enjoy the overall texture his brushwork gives to the surface of his paintings and his handling of streams and small rivers.

Link: John Ottis Adams on The Athenaeum (click for detail, and again for larger image)
ARC
Bios on Wikipedia, Suite 101, and RAM
Artcyclopedia