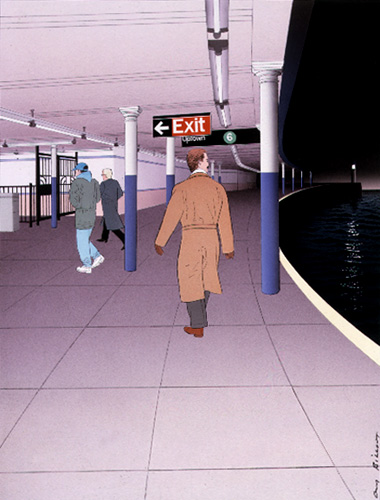 Guy Billout seems fascinated with patterns, whether of hedgerow mazes, the multiple columns of colonnades, tiled floors or repeated structures; particularly those patterns that lead us to one conclusion, only to be presented with another.

Billout is a French illustrator who deals in quiet irony. His images are still and contemplative, even when portraying dramatic events like a ship being turned upside down under the crest of an enormous wave, lightning strikes being reeled in by a man on a roof with a boat hook or the prehistoric filling of the Mediterranean Sea as viewed by modern tourists at Gibraltar.

He invites you into a seemingly normal scene, in which he quietly but firmly pulls the rug out from under your expectations as you notice the details.

Lighthouse lights bend to surmount cliffs, or provide a walkway for the operator, a couple warm themselves by a fireplace, which on closer inspection contains the fire of a city being bombed, people walk on parts of an image, the sky line or horizon line, a white dune is climbed on one side by a desert traveller, on the other by an arctic hunter, bridges stop and resume in mid-crossing or are constructed by rolling out girders like duct tape in midair.

Billout has been a long time contributor to the Atlantic Monthly and other major publications, as well as doing a variety of commercial work. He is a faculty member of the Parsons Illustration Department and his books include The Frog Who Wanted to See the Sea, Bus 24 and a new collection, Something’s Not Quite Right

At times his reminds me of Magritte, twisting our preconceptions of how the world is arranged, sometimes of the juxtaposition of multiple worlds by magic realists like Rob Gonsalves; at other times he can bring to mind the over the edge humorous rearrangements of reality by Saul Steinberg or B. Kliban.

Like all of those artists, Billout excels at that aspect of art that brings us to a refreshingly different point of view on the world. He lays out a a geometric grid of stillness to quite our minds, and then drops a pebble of irony into the pool, allowing it to gently ripple through our unconscious mind until it dawns on us that, indeed, something’s not quite right here; but not quite right in a most delightful way.

It’s unfortunate that most of the images available are somewhat small, because the devil, as they say, is in the details.