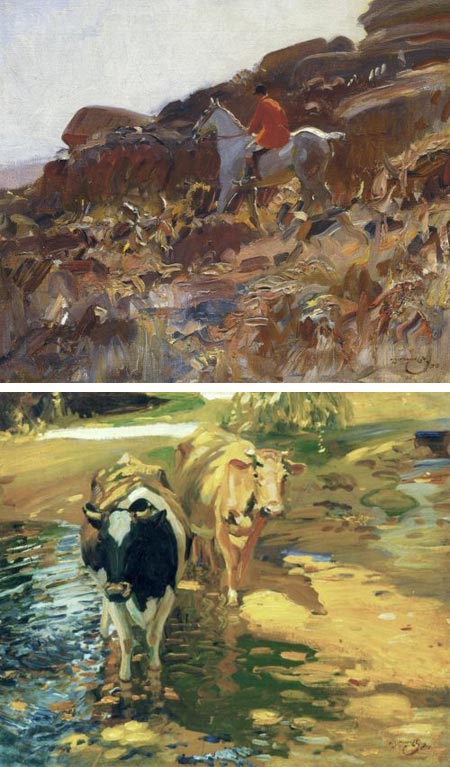 Sir Alfred James Munnings is best known as an equestrian artist. His beautifully rendered images of race horses bring high prices at auction and are the subject of popular posters and reproductions.

In his early career, however, he was a plein air painter, whose subjects were as varied as the English countryside, and whose artistic sensibilities were informed by Constable, John Sell Cotman, and in particular the animal paintings of George Stubbs. He was also, evidentially, influenced by Impressionism, as his paintings are remarkably loose, filled with free brushstrokes, and a marvelous mixture of refined passages and great chunks and blobs of paint.

In 1892, at the age of 14 he apprenticed with a lithography firm, and at night attended the Norwich School of Art (you can see his painting of a class here). At the end of his apprenticeship he was offered a job with the firm, but turned it down to seek his career as a painter.

Tragically, he lost sight in his right eye as the result of an accident shortly after, but was undeterred in his pursuit of painting. The story goes that he had to stab at the canvas for a while, judging the distance to the surface by feel until he got the range.

Had I only see Munnings’ work in reproduction, I doubt that I would have paid him much attention, as images of fox hunting and horse racing are not high on my list of favorite subjects for paintings (Degas notwithstanding); but I had the opportunity today to see an exhibit of his work at the Brandywine River Museum, and came away very much impressed with Munnings as a painter.

Though he was a vocal opponent of Modernism, claiming that Piccasso, Matisse, Cezanne and their associates had ruined art; he was evidently favorably impressed by the freedom of the Impressionist painters and perhaps their American counterparts, as his own work was delightfully “modern” in that respect. Like the American Impressionists, however, he kept the firm underpinnings of academic art beneath his free brushwork.

Munnings was, in fact, a member of the Royal Academy, and for a time late in his career, served as its president.

Hi was probably one of the finest painters of horses and other animals.

In small reproductions, you would get the impression that he was painting tightly, with lots of blending, and occasionally his horses or figures are more smoothly rendered than the backgrounds he sets them in; but those backgrounds, and his landscape paintings, are full of exuberant paint handling and wonderful textures.

There are a number of books on Munnings, including an autobiography.

I’ve assembled some links below, though most reproductions are too small to really get a feel for the close-up quality of his paintings.

The exhibit at the Brandywine River Museum, which is in Chadds Ford, Pennsylvania, not far from Philadelphia and even closer to Wilmington, Delaware (see my post on Andrew Wyeth), has been assembled from local collections in the area. The Brandywine Valley has history of equestrian events and organizations, one of which, the Radnor Hunt Races, has been associated with the museum for 30 years.

Many of the paintings are on loan from private collections, and not normally on view to the public. The show is strong with his early paintings, landscapes and figurative work.

Alfred J. Munnings from Regional Collections is on view at the Brandywine River Museum until September 1, 2008.

I plan to see it again.

Addendum Katherine Tyrrell was kind enough to let us know that those in the UK can visit the Sir Alfred Munnings Museum in Dedham Vale in the heart of Constable country on the borders of Essex and Suffolk; and that there is a web site for the museum.

She also points out that Munnings was for a short while a member of the Newlyn School in Cornwall (see my post on Stanhope Forbes) and also had a studio at Lamorna.