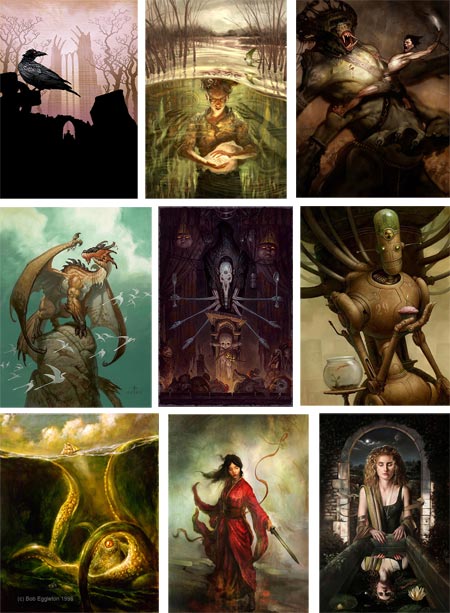 The superb choices of illustrators, and the art direction that aligns them in in fine tuned harmony with the stories they are illustrating, is the work of Tor’s insightful art director, Irene Gallo (see my previous post on Irene Gallo and her blog The Art Department). Gallo has been the art director at Tor since 1992.

Tor books has just launched a new web site at tor.com, and it has immediately become one of the best destination sites for science fiction and fantasy on the web.

In addition to the fascinating blog, and the stories you can read online (soon to include a graphic story, The Leviathan by Wesley Allsbrook), the new Tor web site includes a feature of particular interest to Lines and Colors readers, a gallery of some of their terrific illustrators.

There is a Featured Artist, currently Craig Phillips, and a roster of some of the field’s best illustrators, each with a gallery of representative work.

The list includes many illustrators I’ve featured here on Lines and Colors, including Craig Phillips, Scott Altmann, Christian Alzmann, Patrick Arrasmith, Daren Bader, Volkan Baga, David Bowers, Aleksi Briclot, Brom, Kinuko Y. Craft, Brian Despain, Bob Eggleton, Craig Elliot and Jon Foster, as well as many others that I haven’t covered who are sure to be the subject of future posts.

It’s an impressive showing and, as of this writing, they are apparently only up to the “F’s” in filling out the gallery.

Despite a few little post-launch glitches (missing thumbnails in some of the galleries) this is a fantastic collection of fantastic art, and even in its initial stages, already one of the best on the web.

The only downside I can possibly see is that that the Tor blog may distract Irene Gallo from her regular posting on The Art Department. While her posts on the Tor blog would be as interesting and informative, it’s nice to have them in one place, undiluted by other topics.

Though there may be larger repositories of science fiction and fantasy art on the web, you would be hard pressed to find a more concentrated sampling of the best the field has to offer (up to the “F’s”, that is).

Correction: Don Dos Santos was kind enough to write an let me know that there are, in fact, links to the other alphabetically arranged sections of the gallery. I specifically looked for links to additional pages at the top and bottom of the column of thumbnails, but they are off to the left in the heading area, which graphically seems to be a separate element from the thumbnail column.