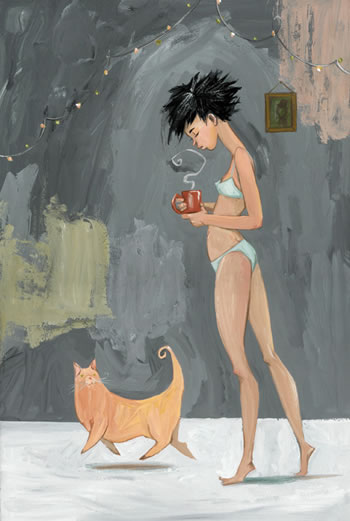 Shino Arihara’s often deceptively simple illustrations are usually in service of a concept, illustrating not only a particular article or story, but the underlying idea.

However, as is often the case for me when viewing the work of illustrators, I find some of her most interesting work is among her personal pieces, unrestrained by the demands of publishing.

Arihara’s illustrations appear to be painted in gouache. Her brief bio page doesn’t mention anything about technique or medium. It does tell us, however, that her clients include L.A. Weekly, The Boston Globe, The Wall Street Journal and Time Magazine, among others.

Her work has been included in American Illustration, Spectrum and illustration annuals for Communications Arts, which also featured an interview with her in the October, 2007 issue. She is also the recipient of a Bronze Medal from the Society of Illustrators.

In addition to her editorial work, Arihara has illustrated books like Ceci Ann’s Day of Why by Christopher Phillips, and A Song for Cambodia by Michelle Lord.

One of the characteristics of her work that I find most appealing is her use of the texture of the paint as a pictorial element, particularly in backgrounds or large areas of color in which the paint not only keeps, but emphatically declares, its identity as paint, without losing its role in conveying the image.