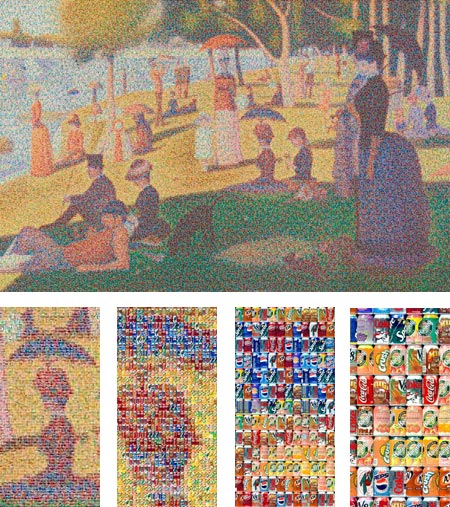 In the course of writing about science fiction, fantasy and horror illustration and concept and production art for movies and games, I’ve come across lots of wonderfully scary Monsters and icky creatures, but rarely do I encounter images that are truly scary.

The image above, an interpretation of Seurat’s pointillist masterpiece, A sunday Afternoon at the Island of Le Grande Jatte, was created by Jordan using digital compositing, and depicts the image as composed of 106,000 aluminum cans, the number used in the U.S. every thirty seconds.

In his series Running the Numbers: An American Self-portrait, Jordan has set out to convey with photographic manipulations and a few succinct statistics the magnitude of our consumerist society, an out-of-control rampaging monster that would send Godzilla, King Kong and the Cloverfield monster whimpering for cover.

As Jordan points out in interviews, the human mind isn’t wired to grasp numbers beyond a certain scale, so he has constructed images using the cast-offs from our consumer madness to create beautifully scary images that, once you understand the reference point of their scale, are shockingly visceral.

His images themselves have some scale when viewed in a gallery setting, displayed as large photographic prints about 5 ft (1.5m) high, large enough to see the whole from a few steps away and the individual elements close up.

Jordan started out as a straightforward photographer, searching for “accidental color” in places like container import shipyards and garbage heaps, but his images of colors found in large scale trash heaps started to elicit responses from people that made him realize the power they had to convey a bit of the enormous scale of what we discard. He eventually began searching for a way to communicate that more effectively and turned to digital compositing in Photoshop.

Jordan explains this more eloquently in this video from the Greener Gadgets Conference and a more extensive one from Bill Moyers Journal.

In the videos you can see some of his photographic prints on display in galleries and get a feeling for their size. He also places silhouettes against some of the images on his site for the same purpose.

Most of Jordan’s images are not versions of famous artworks like the one above, I just naturally gravitated to that one, but many form a recognizable image; like a forest of tree trunks composed of 1.14 million shopping bags, the number used in the U.S. every hour, a skull formed from 200,000 cigarette packs, and a series of tubes made of one million plastic cups.

He has broadened his scope to encompass other social issues, like a wall of large childrens’ alphabet building blocks, composed of nine million smaller photographs of childrens’ building blocks to represent the number of children in the U.S. without health insurance in 2007, and, in a recent addition, the top of the first page of the U.S. Constitution, composited from 83,000 photographs of the mistreatment of prisoners at Abu Ghraib.

Some of the earlier works in the series are more direct, like a field of 60,000 plastic bags, the number used in the U.S. every five seconds and a wall of 3.6 million tire valve caps, one for each new SUV sold in the U.S. in 2004, and many others in the Intolerable Beauty series. (His site is unfortunately in frames, so I have to pop you out of the site context to link to the individual series.)

The numbers are vaguely scary, but seeing the numbers in a way you can immediately grasp is much much scarier, and displays some of the power inherent in the skillful use of images to communicate ideas.

Note: Some of the images linked to here, though they should be seen by every American adult, should be considered Not Safe For Work; particularly those from Abu Ghraib, which are unacceptable in the truest sense of the word.