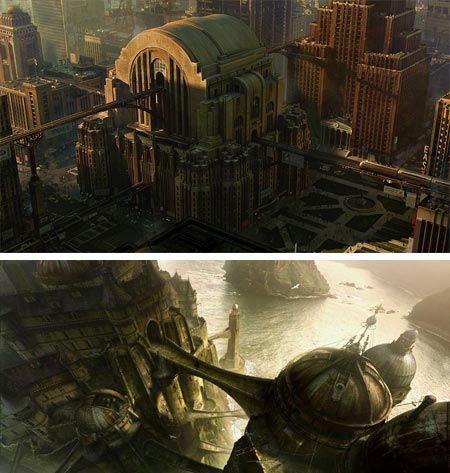 Many of the images that we accept, almost without question, as the backgrounds for scenes in motion pictures, are in part or in total the creation of matte painters.

These image can make us believe the action is taking place in a fantastic other world, or in a slightly modified version of this one.

DUSSO is the professional handle of Yanick Dusseault, a matte painter and production artist working in the film and, to a lesser extent, television industries. I wrote a short post on his work back in 2005.

Since 2003 he has been working with ILM (Lucas Digital), for whom he is a Lead Matte Painter and was responsible for many of the striking background images for Star Wars: Episode III, Revenge of the Sith.

Other film credits include The Island, War of the Worlds, Peter Pan, Pirates of the Caribbean and Terminator III.

His web site includes galleries of his matte painting, production art and personal work. Many of the images in the Matte Painting section include photographs that were the basis of altered backgrounds, along with the finished matte painting.

There is a special gallery for his work on Star Wars: Episode III, in which you can see large images of his wide aspect, sometimes 360° panoramic background paintings for that film.

Dussseault works digitally and the level of detail in his images is striking, as is the mastery with which he creates imaginary landscapes and cityscapes, and imbues them with the realistic feeling of sunlight, dusk or the scattered light of cloudy skies.

I love the luxurious detail he has lavished on the image above, top (I don’t know what film is was for), and the wonderful building that takes its design cues from a 1930’s radio. In looking at the large version in his Production Art section, I was also impressed with the way the sunlight plays across the tops and edges of the building’s form, and the rather daring darkness in which he casts the shadowed areas of the building and the streets and plaza below.

In order to achieve the effect of a projection of physical reality, matte painters must exert precise control over tonal values and subtleties of color, any deviation wide enough to be noticeable can “break the spell” and remind you that you are seeing a mock environment, rather than a believable setting for the story.

Dusseault is at that top level of matte painting artistry that can make you believe the unreal is real, and transport you to other worlds, times and places.