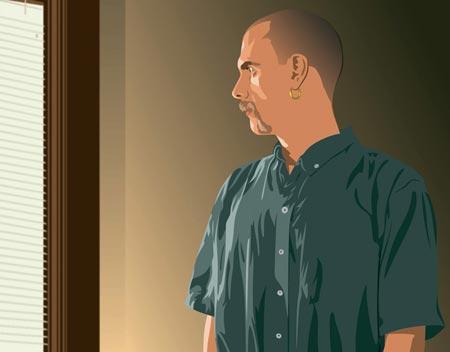 What strikes me about Arthur Mount’s crisp, clean illustrations is what he leaves out.

I’m not just talking about the degree to which he simplifies his images, extracting from his reference material just those visual elements that are crucial to conveying the subject, but the line he draws (if you’ll excuse the expression) between a final piece and the temptation to add more.

There are areas in his drawings, particularly of faces, in which most artists would find it difficult to resist adding more, like shadows on noses. Mount holds back, leaving a kind of dynamic balance between rendering and abstraction that walks the edge, and works wonderfully.

He conveys much with his carefully placed and shaped areas of color (which I presume are drawn in a vector illustration program), choosing colors that, though they appear naturalistic, are actually not the colors you might find in a photograph or representational painting of the subject, but are carefully designed to “fill in” for a wider range of colors, a bit like bass players who fill in for rhythm guitar in power pop trios.

I first wrote about Arthur Mount back in 2005. Since then he has added considerably to his portfolio. In addition to his people, who include a number of famous faces, he has sections for architecture, places, objects and maps.

Both his “Storyboards” and “Instructional” sections contain some fascinating wordless storytelling.

Once you pop up a detail image from a thumbnail, you can move forward or backward through the gallery selections. It’s worth noting that simply clicking on the image will move you forward, a nice usability touch.

Mount has an extensive client list, including The New York Times, Fortune, GQ, The London Times, Popular Science, and a number of commercial clients. The Selected Projects section walks though a few of his projects in depth.

I really enjoy beautifully done diagrams, which at their best are a seamless blend of art and design. Mount brings those design skills to his illustrations, with a control of negative space that is the powerful foundation on which he builds his clear, forceful images.