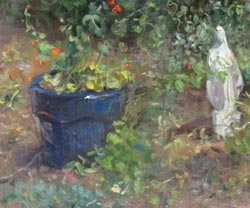 I’ve been reporting on the “Painting a Day” phenomenon since well before it was a phenomenon, since my initial 2005 post on Duane Keiser (left); who originated the practice in its commonly understood form of painting one small painting each day and posting it on a blog, usually also offering it for sale.

The demands of the practice frequently encourage artists to paint small still life subjects of objects close at hand, fruit, china, painting supplies and so on, but a number of painters focus more on landscape and painting en plein air, so I’ll concentrate on some of those for this round. These painters usually work a little larger than the daily painters who focus on still life, roughly 8×10″ (20x25cm) instead of 6×8″ (15x20cm).

Though Keiser largely concentrates on still life, he does paint landscape, and I like to mention him in these posts.

Here are some other daily painters who concentrate more on landscape than on still life. 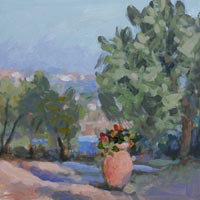 John K. Harrell is a Denver based painter. His subjects include the Colorado countryside, as well as paintings from his travels in the U.S. and Europe. Harrell has a nice economy of notation, in which impressionist handling is used for areas like foliage and textured surfaces where broken color is most effective; but like the American Impressionist painters from the turn of the last century he has not locked himself into rendering everything with short strokes, allowing larger areas of color to predominate when appropriate.

While most daily painters work in oil, Harrell works in acrylic and occasionally pastel. He seems to be using thickened acrylics, though, as they have a feeling of surface texture and brush strokes. Harrell also is a participant in the Daily Impressionist Painters group blog and has a dedicated web site that features his larger and more finished work. 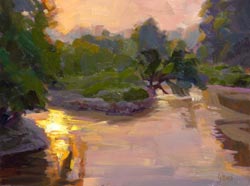 Christopher Greco is a daily painter who paints primarily en plein air. His loose, painterly handling of landscape subjects is particularly effective, I think, in his paintings of small creeks and streams.

He also paints landscapes with structures in them, like houses, barns, garages and storefronts, where his succinct brushwork defines their forms in a series of brief strokes. Greco makes a point of saying that he doesn’t “edit” his work, in that every painting is posted, so that we see his daily progress as he experiments and grows as a painter. 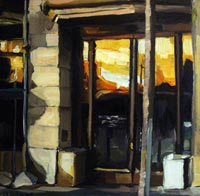 Edward B. Gordon is a painter from Germany and has been practicing the painting a day regimen for longer than most, since November of 2006, and credits Duane Keiser with his impetus to begin the practice. He posts small paintings of a variety of subjects including figures, landscapes and still life.

He has a nicely angular approach to brushwork, laying in individual brush strokes that serve to define a plane. Unfortunately, his posted images are a bit small, leaving me wishing there were lager versions in addition, though he does occasionally post detail images of some of them.

Note: he has some kind of Flash map/comment widget running in his sidebar that my copy of Safari momentarily choked on. Your milage may vary. 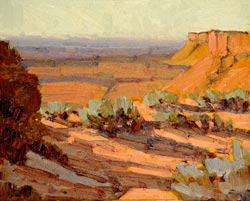 George Coll lives in Colorado and his daily paintings are of the mountainous landscape surrounding him. Coll treks from his two acre property out into the back country with with 2 pack llamas carrying his supplies (now that’s different). His location paintings are often in the muted tones of daylight softened by the shadows of the mountains, accented with brilliant light on distant peaks.

He also paints figures and town scenes and his blog will occasionally feature images of his larger works, done in the studio from his location sketches. Coll also has a web site that showcases his larger finished work. 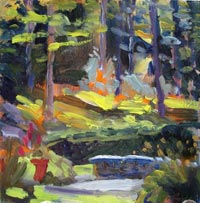 Candy Barr is a painter from Vermont who frequently paints landscapes. Her paintings are sometimes very straightforward in their color palette and at other times “pushed” into brighter, almost expressionistic color.

She also has a web site on which you will find her larger pantings. Of particular interest are her “floaters“, images of nude figures floating in water.