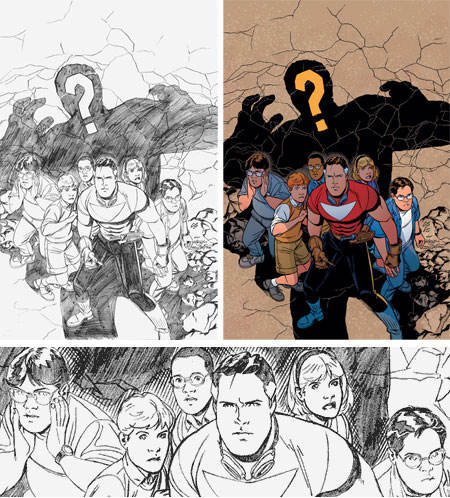 Sprouse is most noted for his work on Alan Moore’s Tom Strong, a comics series that combined some of the best elements of Lee/Kirby stories for The Fantastic Four, the early Challengers of the Unknown comics and the Doc Savage pulp novels.

The series was wonderfully fun and beautifully drawn, and Sprouse was the perfect choice to bring it to life. It was, in fact, designed around his predilections. Moore fashioned all of the titles in his ABC comics line around his co-creators strengths and drawing styles. In Sprouse’s case, that meant lots of high-tech gadgets, spaceships, and a robust family of characters. Sprouse garnered two Eisner awards for his work on the series. The image above shows one of his covers for the series in pencilled and finished form.

Unlike the tendency on the part of a lot of superhero artists to go over the top in trying to make their characters look “super”, Sprouse stays grounded in a more naturalistic portrayal of people, giving his stories an extra feeling of realism, in spite of the delightful degree of lively stylization in his drawing style. His figures, in particular, have the kind of power-under-the-surface feeling you see in athletes, as opposed to the too-musclebound-to-do-anything-but-grimace style all too common in superhero comics.

Sprouse has also worked for other major comics companies on titles like Legionnaires, Supreme and Midnighter. He drew a Star Wars story for Dark Horse, Star Wars: Splinter in the Mind’s Eye, and an under-appreciated science fiction graphic story called Ocean with Warren Ellis. His most recent project was Wildstorm’s Number of the Beast, written by Scott Beatty.

As far as I can determine, Sprouse does not have a web site or blog, so I’ve dug up what resources I can find. There is an unofficial gallery of his work on Comic Art Community.

Addendum: Johnny Bacardi was kind enough to write and let us know that Sprouse does, in fact, have a blog. (Thanks!)