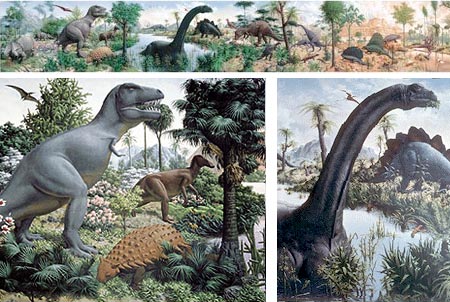 I’ve wanted to do a post on Rudolph Zallinger for some time, but I keep putting it off in the hope that more of his work will be posted on the web. Unfortunately, that doesn’t seem to be happening. I may still be able to make some people who aren’t already familiar with him aware of his work, even if I can’t show you a great deal of it.

Zallinger was one of the pioneers of of paleontological art, perhaps second only to Charles R. Knight in that respect. Zallinger is best known for his stunning 110×16′ (33.5×4.9m) mural, The Age of Reptiles, that covers the entire east wall of the Yale Peabody Museum’s Great Hall (watermarked poster version here).

The mural depicts the evolution of life on earth over 300 million years, with different sections, separated by the visual device of foreground trees, for geologic periods. It was painted with egg tempera in the fresco secco method; meaning “dry plaster”, as opposed to the more familiar traditional method of painting with into wet plaster (buon fresco) as practiced by Michelangelo for his frescos in the Sistine Chapel.

Rudolph Franz Zallinger was born in Irkutsk, Siberia to Austrian and Polish parents. They eventually emigrated to the U.S. and settled in Seattle where Rudolph was raised. His early interest in art was encouraged; and at age 17 he started study at Yale University’s School of Fine Arts on a merit scholarship as a painting major, and was also trained in illustration. He taught at the school after graduating.

He also started doing some scientific illustration and his talents were noticed by the director of the Yale Peabody Museum, who approached him about the possibility of doing a mural on the museum’s east wall.

Zallinger undertook a six month crash course in prehistoric plant and animal life and comparative anatomy with scientists from Yale and Harvard, and spent a year and a half creating preliminary studies and sketches before commencing work on the mural, which took three and a half years. The museum appointed him “artist in residence” a post he held for the remainder of his life.

Life magazine commissioned Zallenger for a series of illustrations and covers depicting prehistoric life, and his work also appeared in several books, notably The World We Live In, culled from the Life magazine articles, and The Giant Golden Book of Dinosaurs and Other Prehistoric Reptiles (which I still have my treasured copy of — look for it used, see a preview here).

One of his commissions for the magazine was later expanded into a new mural at the Yale Peabody Museum of Natural History as The Age of Mammals, depicting prehistoric mammals that, though they don’t get the same press, are every bit as wonderfully weird as the dinosaurs.

The past is always changing, particularly the distant past, as new information is brought to light. Knight’s active, leaping dinosaurs were replaced by Zallinger’s slow, gravity-bound behemoths, which were based on the prevailing scientific theories of the time. In them you’ll see the classic upright, tail dragging stance of tyrannosaurs, and elongated sauropods semi-submerded to support their weight, that were characteristic of mid-20th Century paleo art. It was Zallinger, in fact, who set the standards for that art, the artistic component of which has seldom, if ever, been matched.

Since then, the continued revision of our vision of the past has gone back to more lively dinosaurs with very different interpretations of anatomical reconstruction (which some modern paleo artists carry too far, indulging in fanciful depictions of 5 ton tyrannosaurs sprinting like leopards and brachiosaurs rearing on their hind legs in defiance of physics and bio mechanics).

As anachronistic as they may seem in light of modern interpretations of dinosaurs, Zallinger’s inspired visions still have an uncommon visual power, unlike any paleontological artist before or since. They are now best appreciated as artworks, and powerfully evocative artworks. Zallinger studied traditional painting techniques and his paintings of dinosaurs look as though they are the interpretation of a Renaissance master, which I find just an amazingly great combination.

Reportedly Daniel Varney Thompson, the most authoritative translator of Cennino Cennini’s 15th-century classic The Art of Painting, on seeing The Age of Reptiles nearing completion, stated: “That wall is the most important since the 15th Century”.

Unfortunately, the Peabody Yale site is a bit confusingly organized; and, though it has information about the murals, including podcasts by contemporary scientists on the subject, and an article on the making of the mural by Zallinger himself; it is disappointing shy on images. They seem so desperately paranoid that someone will print a low-res version on a T-shirt or something, that they would apparently rather let Zallinger languish in obscurity than give the web audience a taste of how fantastic his work was.

Though I have never seen the actual murals (they’re high on my list whenever I get to Massachusetts), I have had the privilege of seeing a small (perhaps 12×50″) preparatory painting for the larger work.

I simply love the feeling in Zallinger’s work, his Renaissance flavored visions of steamy prehistoric jungles where hulking, leather skinned giants lashed at one another in slow motion fury under storm-darkened skies — wonderful stuff.

Link: Yale Peabody Museum: The Zallinger Murals
The Age of Reptiles
Age of Reptiles poster (watermarked)
The Age of Mammals
Age of mammals poster
Posters and books at Peabody Museum Store
Peabody Museum Zallinger bio
The Making of The Age of Reptiles Mural
The Giant Golden Book of Dinosaurs and Other Prehistoric Reptiles (look for used)
Excerpts from above book on Sit Down and Shut Up, additional Zallinger
Article on The World We Live In on AntiQuark, click for large image
The World We Live In (Amazon link - look for used)
Yale Alumni Magazine article on virtually updating the murals
Article with small images on Right Some Good
Life magazine covers by Zallinger, Chesley Bonestell and others (links temporarily broken?)
Article on Blog of the Realm
Article from New York Times
Inadaville