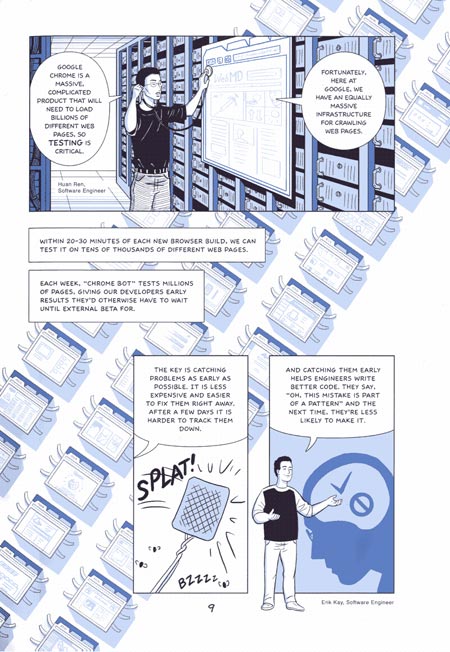 In his role as one of the main analysts and thinkers on the subject of the comics art form, and the author of several widely acclaimed books on the subject in which he discusses the medium in the medium, presenting his thoughts in the form of graphic narrative; Scott McCloud has in the process become the the foremost proponent of an unsung aspect of the visual storytelling medium — its astonishing ability top convey information as well as tell a story.

The comics medium has been utilized for informational purposes for a long time, notably by the government, military and in industrial applications, where the combination of images and words can convey information more clearly, and often more rapidly, than words alone.

Rarely, if ever, has it been used at the level exhibited in McCloud’s books, Understanding Comics, Reinventing Comics and Making Comics. There he utilizes comics as an informational medium with a grace, artfulness and intelligently structured approach to the graphic narrative that brings it into a different category, more akin to first rate essay writers than the prosaic uses of comics for instruction that preceded him (there are some exceptions, of course, like Larry Gornick’s Cartoon History of the Universe, but McCloud is working at a different level). See my previous post on Making Comics.

Google has now put McCloud’s expositional graphic narrative skills to use to introduce and explain the concepts behind their new open source web browser, Google Chrome, in the form of a 38 page comic book.

Presumably there are print versions of this, but you can read it online from Google’s site (and also on Blogoscoped, where it appears with a numbered page index). My one disappointment is that McCloud has conceded to the demands of print format and arranged the pages vertically, instead of fitting them to the horizontal format of the omputer screen, which is where I will wager the majority of people will wind up reading this, even though it was intended for print.

There is also a brief article on McCloud’s site about the project.

Google, apparently feeling the need to rebuff any attempts by Microsoft to use their browser market dominance to lead web users away from Google to their own search engine, has jumped into the open source browser fray, occupied by Firefox and others, with a new offering. (“Open source” means a computer application in which the underlying code is not proprietary, and can be worked on by anyone with the skill and interest to contribute, and is not “owned” in the same sense as a commercial product.)

They have gone to lengths to explain what they are doing, and how, and what they are doing differently. Normally these concepts are pretty abstract, and not that easy for an outsider to grasp; much like the concepts behind, say, graphic narrative, and how it is both similar and different from other mediums.

So Scott McCloud was an obvious and superb choice for the task. Even if you’re not particularly interested in why or how Google’s new browser works, it’s worth checking out McCloud’s graphic exposition, simply to see how it works. Look at the way he has seamlessly blended images and words to convey these abstract and sometimes technical concepts. It’s so smooth that, like his books, you have to intentionally step back to notice the process.

Like most artful of writing, it doesn’t intrude on your conscious impression of the work, but carries you along without your awareness. You almost learn in spite of yourself, a fascinating example of the power of words and pictures working together to tell a story, and/or inform and educate.

Link: www.google.com/googlebooks/chrome
On Blogoscoped (with index)
Article on www.scottmccloud.com
My previous posts on Making Comics, and here
Previous post on McCloud's Hearts and Minds (webcomic)