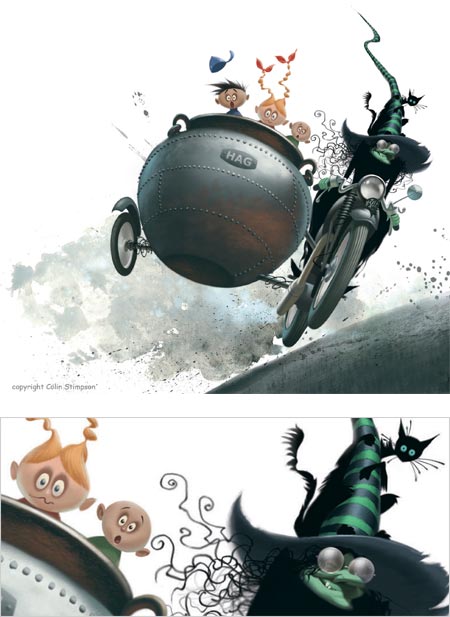 The classic story of Hansel and Gretel informed us of the alarming eating habits of witches, who love to lure children into their gingerbread houses, fatten them up with sweets, snap them into the oven and cook them right up. Yum.

How unsophisticated, though, and how simply old fashioned by today’s standards of cooking shows and recipe books; and how delightful then, to have a modern take on the gruesome eating habits of pointy hatted, children eating witches that writer Martin Howard and artist Colin Stimpson have cooked up as How to Cook Children: A Grisly Recipe Book, a funny and refreshingly politically incorrect update on the idea.

It is indeed a grisly recipe book, and the recipes include such delicacies as “Cajun Cherub Gumbo”, “Barbied Shrimps” and “Deepfried Small Fry with Fries”, each elucidated by a guest witch/chef with a particular speciality for cooking up the little darlings.

The real pleasure here, though, is in Stimpson’s snappy, witty, and charmingly gruesome illustrations.

I wrote about Colin Stimpson last Summer. In addition to his illustration work, he has been a concept and color guide artist on a number of animated feature films for Walt Disney Studios, as well as serving as Art Director for The Emperor’s New Groove.

He brings some of the lively style, springy line and artful exaggeration common to animation and concept art to his gleeful portrayals of our witchy chefs and their dastardly cookery.

The book is available in the UK through Pickabook and Amazon.co.uk, but unfortunately not through Amazon.com here in the the U.S. (at least not yet, Stimpson was kind enough to send me a review copy).

The Amazon UK site does have a few images, but small ones; and except for the home page of his site, Stimpson’s online portfolio doesn’t include work from the new book yet.

One Reply to “Colin Stimpson (update)”