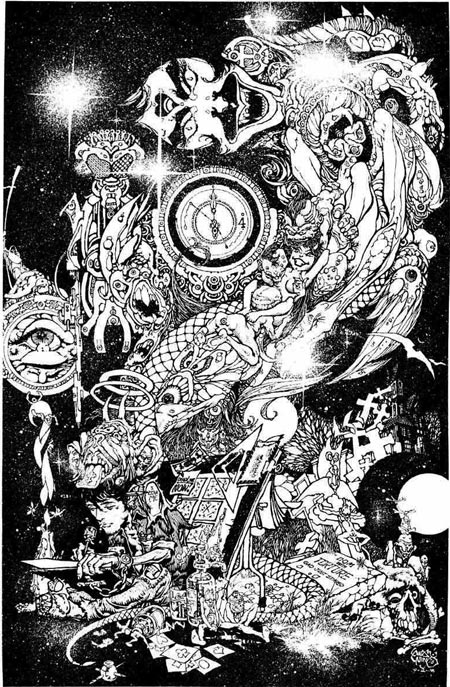 There are a number of strong communities of comics art (those of you in the expensive seats read: “graphic storytelling”) in various parts of the world, each with its own stylistic leanings. Some, like Japan, France and Belgium are more familiar to us here in the U.S. than others, like Italy, the UK, South America, China, Korea and the Phillipines.

Unlike comics artists in China, Korea and most other countries in the Western Pacific rim that produce comics, artists in the Philippines took their primary influences not from Japanese Manga styles but from Spanish, South American and North American influences.

In the early 1970’s established artists from the Phillipines, many of them with with their own studios and publishing endeavors, like Alfredo Alcala, Nestor Redondo (a personal favorite), and Tony De Zuñiga began to do work for American companies like Marvel, DC and Warren.

I don’t know the details, but it may have had a lot to do with the crackdown and sanitization of the comics medium that resulted when the Marcos government declared martial law and began to outlaw or control all mass media in the country.

In the U.S., the Filipino artists’ unique styles and intense, detailed rendering brought them the immediate attention of publishers and readers, and had a dramatic impact on the American comics artists working at the time.

The elder Filipino comics artists (in the Phillipines, is was “komiks”, as there is apparently no “C” in the alphabet), soon began to bring some of their younger contemporaries into the American market. One of the most notable of these was Alex Niño, who would become a star comics (and komiks) artist in his own right.

Niño illustrated over 300 stories for publishers in the Phillipines; and in the U.S. did work for Marvel, DC, Warren, Byron Preiss and Heavy Metal magazine.

Drawing on influences that ranged from his fellow Filipino artists to golden age pen and ink illustrators like Franklin Booth and Joseph Clement Coll and science fiction illustrators like Virgil Finlay, Niño created a synthesis of pen and ink styles that he used to propel his highly imaginative flights of fantasy.

His work ranged from quietly elegant renderings to over-the-top, wildly stylized fantasies that had some of the manic energy of American underground comics.

His rendering style combined the calligraphic thin-to-thick line work common to American comics with the intensely textural rendering of pen and ink illustration, to unique effect.

In the late 80’s and early 90’s Niño’s decorative style and fertile imagination led him to doing production and design work for Disney Studios, contributing to feature animation like Treasure Planet, Mulan, The Emperor’s New Grove and Atlantis.

Auad Publishing, who I have mentioned in the past as the publisher of terrific books on Franklin Booth, Alex Toth and other illustrators and comics artists, has just released The Art of Alex Niño, a 160 page labor of love into which Auad had crammed page after page of Niño’s lavishly rendered illustrations, drawings and comics pages, including several complete short stories.

The book covers a wide range of Niño’s styles, and includes a healthy sampling of color work (perhaps a quarter of the book). As much as I enjoy his color work, it was in his black and white work, particularly in the Warren magazines, that I think Niño was able to utilize his drawing and rendering strengths, and his dramatic sense of page design, to best advantage.

The Gallery of Niño’s work on the Auad site is small, and the is no official site for Niño or large single repository of his work in the web that I’m aware of. I’ve tried to line up some other resources for you below.