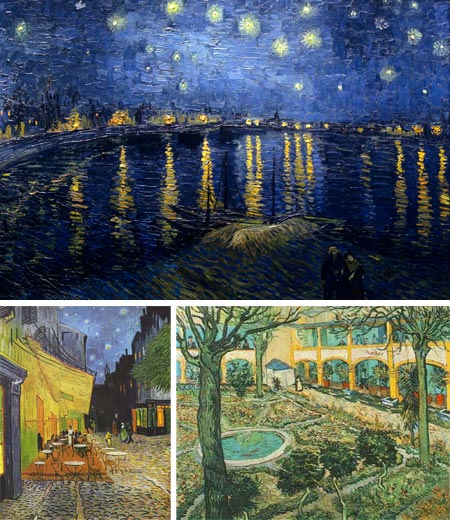 I will wander off topic for a little personal background (“local color”, so to speak) and then come back.

The town of Arles is in Provence, a region of France that borders the Mediterreanean Sea and Northern Italy, where the Romans established their first province (provincia) outside their borders (hence the name). Arles was one of the major Roman cities in France, still has a largely intact Roman theater and arena and a good bit of the city wall. Today it’s a charming and visually rich town, popular with tourists.

Provence has long had a draw for artists, who find a particular appeal in the warm light and beautiful countryside. In 1888 and 1889 Arles was home to Vincent van Gogh for two of his most productive and most troubled years.

There are none of Van Gogh’s paintings in collections in Arles, the closest is in Avignon, about 20 miles (35km) away, but there are signs of him in many places. When my wife and I traveled to Arles on our first trip to France in 2002 (and I came to the immediate conclusion that the sunlight is indeed wonderful in Provence), Van Gogh’s presence kind of snuck up on us several times.

When we arrived in Arles, after two flights, a bus and train ride and a considerable walk, we were exhausted; and soon discovered that the locals don’t seem to eat between lunchtime and 6 or 7 PM. After spending some time searching for a cafe serving food in the mid-afternoon, we were finally relieved to find a small place that happened to have outdoor seating out its back door at the edge of a courtyard with a pleasant garden.

As we were eating and unwinding, I kept looking at the garden and courtyard, which was backed by a building faced with rows of arches. I found myself fascinated with it, partly because it was attractive, but partly, I gradually realized, because there was something oddly familiar about the place, which was impossible, of course, as I had never been to France before, let alone to this courtyard in Arles.

I finally noticed there was a plaque at one corner of the courtyard and as I approached it, and the view changed slightly, I suddenly realized we were in the garden portrayed in Van Gogh’s The Courtyard of the Hospital at Arles (image above, bottom right, larger version here); which, the plaque confirmed, is intentionally maintained in a pretty good approximation of the way it looked when he painted it (photo here).

Later, after unpacking and settling in a bit, we were out for a drink in a cafe that I had chosen primarily because it had internet access, and I was sitting at the table sketching when I got a similar feeling of odd familiarity from a cafe a few steps away with a yellow front and awning; and I realized that it was the subject of van Gogh’s Cafe Terrace at Night (image above, bottom left). The cafe is currently a tourist spot, named “Cafe Van Gogh” (also here), though we didn’t notice it at first.

We had chosen to sit not in the cafe that was the subject of his painting; but, by sheer chance, in another cafe in almost the exact position Van Gogh must have been sitting while composing his well known work. The effect was even more dramatic in the night, when the awning was lit from below by the glow of lamps, and the colors were uncannily similar to the painting.

We felt the artist’s presence again when walking by “The Yellow House” and in the fields surrounding the town. In particular, when looking out over the Rhone River at night, I imagined him painting Starry Night Over the Rhone (image above, top, larger version here).

Most people are more familiar with the other “Starry Night”, the famous one, The Starry Night; but both paintings, along with The Night Cafe (the lamplit interior) and a number of other works, remind us that as much as van Gogh was a painter of brilliant fields ablaze with the Provence sun, he was also a painter of the night; more specifically, the colors of the night.

Van Gogh and the Colors of the Night is the title of a new exhibition at the Museum of Modern Art in New York. The exhibition promises to be a small (23 paintings, 9 drawings and some letters) but insightful look into Van Gogh’s interpretation of the night, of which he said: “I often think that the night is more alive and more richly colored than the day.”

The exhibition should prove that with some of his most renowned works, including The Night Cafe, The Dance Hall in Arles, The Potato Eaters, Gauguin’s Chair, Starry Night Over the Rhone and the iconic The Starry Night, which is in the MoMA’s permanent collection, along with several less well known works. (The Courtyard of the Hospital at Arles and Cafe Terrace at Night are not in the show, I just included them here to illustrate my story.) There is a catalog accompanying the exhibition.

Van Gogh and the Colors of the Night runs until January 5, 2009 at the Museum of Modern Art in New York and then will be on display at the Van Gogh Museum in Amsterdam from February 13 to June 17, 2009 (English link here). Advance tickets are suggested.

The exhibit should demonstrate that even though the light for artists is indeed special in places like Provence, it is even more special in the eyes of the artist, day or night.

Link: Van Gogh and the Colors of the Night at MoMA
Review with slide show on NY Post
Post on COLOURlovers blog
Review on NYT (requires login, try BugMeNot)

9 Replies to “Van Gogh and the Colors of the Night”