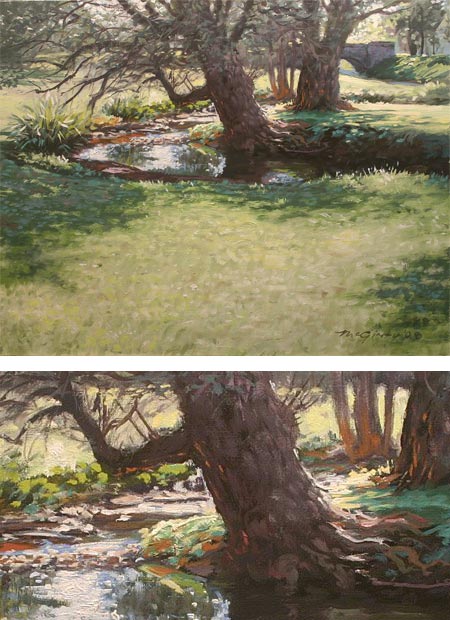 I’ve been writing about the “painting a day” phenomenon for about three years now, along the way looking at a number of painters who aren’t trying to maintain the strict “one painting a day” routine, but are instead painting on a regular but less frequent schedule. Often, these painters can devote themselves to larger and more elaborate works than the small (usually postcard-size) paintings favored by those keeping the daily routine.

A case in point is Mick McGinty, who I wrote about early in 2007.

McGinty has a blog called Twice a Week, on which he posts new paintings with about that frequecy. These are larger, and brought to a higher degree of finish, than the pieces by most of the daily painters, including many of those who are also posting on less than a daily basis. This is partly because of the less frequent schedule, and partly because of the impressive painting skills McGinty developed in his years as a professional illustrator.

His subject matter is also more complex than the often simple still life compositions that lend themselves most readily to the daily routine, varying from complex still life subjects to dramatic landscapes from the Rocky Mountains, and more intimate urban park scenes from his trips east to New York.

McGinty has a terrific command of value and atmosphere, and his tonal contrasts give his landscapes an inviting dimensionality. He also has a great ability to render and suggest textures, whether of the rough edged rocks of mountain passes, the sunlit waters of streams and lakes, or the concrete and cobblestone paths of Central Park.

Texture plays another part in painting, of course, not only the suggestions of texture in the image, but the actual texture of the painted surface. McGinty is one of the few painter/bloggers who posts images large enough to actually see the texture and brush strokes, something I’ve been recommending to other painters for a while. I think it adds considerably to the appeal of a painting to a prospective buyer, who must judge a painting without being able to see the original in person.

As with most painters offering their work for sale directly through a blog or website, McGinty places each work up for auction, in his case (as with most others) on eBay.

I recently did something I haven’t done before and bid on a painting online, one of McGinty’s landscapes, Wandering Creek (image above, with detail below, blog post here, larger version here). To my surprise, and delight, and I won the bid.

I was surprised in that my budget was quite low, as was my winning bid. Like many other painter/bloggers, McGinty has apparently decided on a relatively low minimum, perhaps with the thought that keeping the paintings selling is easier than trying to offer them for sale a second time, or leaving a backlog on eBay.

On receipt of the original, I was again surprised, as I would expect a painting of this size and quality to sell in a gallery for at least three times what I paid for it. (Some of this may also have to do with differences in expectations of gallery prices for art in different parts of the country, I don’t know. I’m on the East Coast, McGinty is in Arizona.)

I was delighted with the surface quality and painterly nature of the piece and very pleased with the color. (Though McGinty’s photographs are good, it’s always difficult to match color in an image. In this case, McGinty has balanced the tone for Windows gamma, which means that for those like myself viewing the image with a Mac, the image will appear lighter and less saturated than the original.)

I was also pleased with the little touches that often not as obvious in the online images; in this case nice little accents of red-brown on the edges of the creek and the underside of the trees where reflections from the sun picking up the color of the creek bottom throw light up under the branches and exposed roots, the subtle blue greens in the background and the varied colors in the stone of the bridge.

Even though McGinty is one of the best at presenting his work online (many suffer from too-small images or make the mistake of offering only a link to eBay, without the advantage of a preview image hosted locally on the blog), I’m still struck by the difference between an online image and the much more immediate charms of an the original work.

It makes it all the more interesting to me how artists like McGinty are to a large extent bypassing the traditional gallery structure and taking their work directly to their buyers through the web.