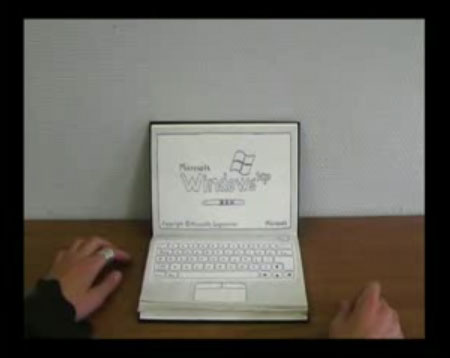 Noteboek, an animation by Evelien Lohbeck that recently won the prize for best NOFF-film 2008 a the Netherlands Film Festival, is one of the cleverest and most amusing animations I’ve seen in a while.

Taking off from the notion of a sketchbook in which a computer keyboard and screen have been drawn, it goes on to self-referentially show a hand-drawn YouTube interface on which a series of Lohbeck’s other short animations, also very clever and amusing in themselves, are shown. Several of them feature the sketchbook in other whimsical roles.

Lohbeck studied animation at the Academy of Arts, St. Joost in the Netherlands (Breda), and also studied interactive design and 3D design.

Her web site, which, in keeping with her award winning film, is designed as a hand-drawn computer interface, features her short films as well as other work. She also has a blog on which she discusses her projects and other topics of interest.

Unfortunately, the films aren’t available on her site at the moment, but you can see many of them on YouTube, including an earlier version of Noteboek.