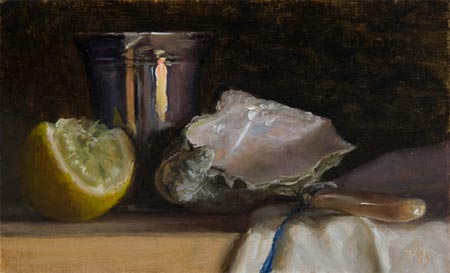 Back in 2005 I found myself writing an arts oriented blog; partly because I enjoyed writing it, and partly because in the process I was discovering terrific artists I wouldn’t have sought out or encountered otherwise.

One of them was Duane Keiser, who had originated the “painting a day” blog concept; painting daily postcard-size paintings, mostly still life, and posting them to a blog called A Painting a Day. At the time, it was a novel idea.

I then discovered Julian Merrow-Smith, who was pursuing a similar process; but much to my delight, was painting not only the intimate still life subjects that lend themselves most readily to that discipline, but also beautiful small landscapes of the Provence countryside. He was posting these to his aptly named blog, Postcard from Provence.

I wrote articles on both artists; and in the subsequent years I watched the painting-a-day blog phenomenon grow from two to hundreds of daily painting blogs; many of them named for variations on “a painting a day” or “postcard from wherever”.

Over that time I’ve written articles on many of the best daily painters, as well as hundreds of other artists and topics, but I find myself coming back to Merrow-Smith’s site more frequently than the others.

I’ve tried to pin down why, exactly. Merrow-Smith is an excellent painter, but the potential subject matter of Lines and Colors encompasses a wide range of visual art, and virtually all of art history, so it’s not like I would favor him over Sargent or Vermeer.

For someone who has been to Provence just enough to respond to images of the area with a wistful desire to return, there was an element of personal identification and visual pleasure in his interpretations of the Provence landscape; and perhaps a projection into the imagined life of a painter in the rural French countryside, evoked by his simple but intensely observed still life subjects; but there was something else that kept me checking back more frequently than to most other sites.

I knew that I particularly enjoyed looking back through his archives, noticing the sequence of his subjects, how long he would pursue a series of still life subjects, then move to landscape, interject a striking portrait, and then return to still life and then back to landscape.

Within each avenue of subject matter there were fascinating smaller cycles of variation in approach, in the type of still life, or composition and choice of landscape; each with recurring themes, like his wonderful shadow-crossed rural French roads or his shimmering views of the Rhone.

In thinking about it, and looking back over his work, I finally realized that what makes his paintings particularly compelling for me is that they represent a story.

There’s a narrative here, a chronology of artistic discovery, perseverance, discipline, economic survival, and the ongoing effort to continue to grow and learn as an artist. Postcard from Provence represents several years of the living of an artist’s life, encapsulated in a series of small paintings, each one of which seems to be a penetratingly direct and honest observation of what the artist encountered as he met his daily joining of brush and paint.

Merrow-Smith has just reached something of a landmark, posting his 1,000th Postcard painting, a beautiful still life that seems to sum up the rich contrasts of value, color and texture that have marked his study of the simple and small (image at top), followed by his 1,001st, a landscape without land, the crown of a lime tree, bright against the Provence sky, not far from the door of his home (image at left, top). I’ve added a few more of my favorites, including two portraits; the one on the left is a self-portrait.

You’ll find his archives can be viewed chronologically by month, sorted by subject; or, if you’d like to see the thumbnails of all 1,001 paintings, viewed by full archive, which gives you an overview and sense of the story that I’ve found so expressive.

The process of writing my (almost) daily blog posts has taught me a few things about creative discipline, and also; after many fallow years, inspired me to take up painting again. And there I find my other fascination with Merrow-Smith’s process and progress — as a terrific example for painters, and other artists, of how to pursue art as a daily practice.

Addendum: The other portrait shown is of Merrow-Smith’s wife, cellist Ruth Phillips. (See this post’s comments.) I wondered if that might be the case, but wasn’t certain.

Also, there is a nice article about Merrow-Smith and his 1,000th Postcard in The Guardian.