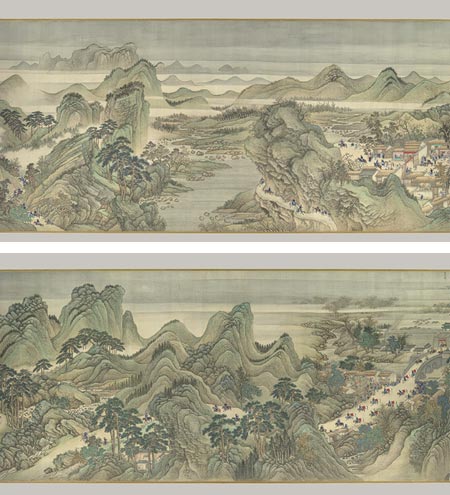 Wang Hui was a Chinese painter who gathered up influences from past masters and wove them into his own interpretation of their methods and techniques; and refreshed the traditions of Chinese painting in the process.

Active during the early Qing period (17th Century), Wang was exposed at an early age to the influence of some of the most prominent orthodox painters of his time, two of whom, Wang Shimin and Wang Jian, were his direct teachers. Together with Wang Yuanqi, these painters are in retrospect referred to as “the four Wangs” and they formed the core of the “orthodox school” of traditional painting during the period.

Wang Hui revived the practice of painting reverential copies of paintings by masters from previous periods, notably from the Song (960-1279), Yua (1279-1368) and Ming (1368-1644) periods. The idea of copying and learning from previous masters is more familiar in Western painting tradition. Wang apparently gets downplayed as academic and derivative by some critics, but he reached such a high level of refinement in his own synthesis of those influences that he is highly regarded in the eyes of others.

Since my knowledge of traditional Chinese painting is exceedingly shallow, I’m not troubled by these concerns, and to my untrained Western eyes, his work is simply beautiful.

Whenever I think about traditional Chinese painting, the word “poetic” comes to mind, in the sense that written poetry is often a distillation, the employment of fewer words, carefully arranged, to tell a story or evoke a mood in a more immediate way than by extended prose.

Similarly, Chinese ink painting seems to be distilled, so that each stroke or tone is weighted with extra meaning, as if alluding to some hidden secret.

Wang Hui’s landscapes resonate with that feeling, his sweeping vistas of undulating curvilinear mountain ranges, mist ladled valleys, graceful trees and sinuous rivers seem transporting, at once etherial and immediate, hinting at the rewards to be found in extended contemplation of the scene.

The images above are two sections from a large scale scroll, 26 inches high and over 45 feet long (68cm x 14m); one of three such scrolls depicting the Kangxi Emporor’s tour of Southern China done by Wang Hui and his assistants. Though they are ostensibly the focus of the story being told, the tiny figures, characteristic of traditional Chinese landscape painting, emphasize the humble place of humankind within the grandeur of the natural world.

This scroll is in the collection of the Metropolitan Museum of Art in New York, which has a dedicated feature on it with several images: The Kangxi Emperor’s Southern Tour, Scroll Three: Ji’nan to Mount Tai.

The Met has mounted a special exhibit Landscapes Clear and Radiant: The Art of Wang Hui that extends from now until January 4, 2009 and features 27 works form several collections in China and the U.S., along with a selection of paintings from the Song, Yaun and Ming period masters who were Inspirational to Wang Hui.