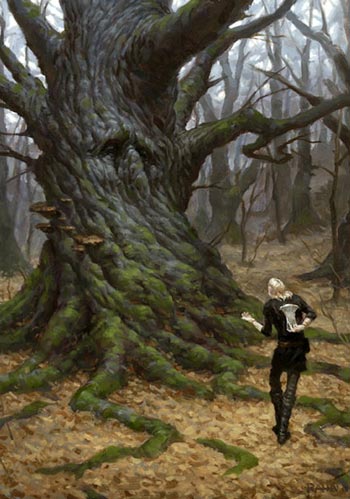 I love the line in Christopher Rahn’s website bio that goes: “As the son of a hippie and a photographer, I was encouraged to pursue what I loved and see how far I could take it… look what happened.”

Look what happened indeed. Rahn is an illustrator with an emphasis on the fantastic and otherworldly, who uses painterly textures, atmospheric effects, sharp contrasts of value and color and compositional tension to give his images drama and visual punch.

Unfortunately, his bio provides little in the way of actual biographical information, other than the fact that he lives in the San Fransisco Bay area, so I can’t tell you much about what he’s done or who his clients are.

I was able to glean a little from his news page — he has apparently done work for Wizards of the Coast, has been published in the Spectrum collections of contemporary fantastic art, and I saw at least one Village Voice cover and a book cover in his portfolio on Lindgren & Smith, so I know he works in those areas. His News section also mentions that he received a scholarship to the annual Illustration Academy in Sarasota in 2007 as part of an award from the NY Society of Illustrators.

Looking through his portfolio, you’ll find a variety of subjects, but always a bent for the strange and dramatic. Rahn works both in traditional media, oils and acrylic, and digital painting. His galleries on his own site and on the Lindgren & Smith sites are organized that way. There is also a portfolio of his work on Workbook that is divided, somewhat redundantly, into Fantasy/Sci-Fi and Oil/Acrylics; though it does contain some images not found on the other sites.

One of the best selections of his work, as is the case with many fantasy and science fiction artists, is in the Tor Books gallery. While I was on the Tor site, I jumped over to Art Director Irene Gallo’s blog, The Art Department, and sure enough, found an interview with Rahn, from which I learned that he received a BA in Illustration from the Academy of Art in San Francisco; and found mention by him of admiration for the work of Jon Foster (also here), whose influence I though I could see in Rahn’s work, particularly in his painterly approach and intriguingly textured backgrounds.

I found another article on Gallo’s blog with a mention of the Society of Illustrators Student Scholarship Exhibit at which Rahn won the Illustration Academy Award. (If you ever want to know what’s going on in fantasy, science fiction and fantastic art, check in on The Art Department.)

One Reply to “Chris Rahn”