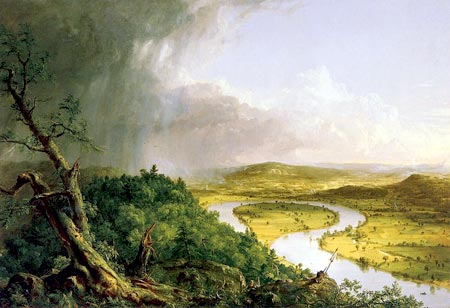 Though often thought of as a quintessentially American painter, the founder of the Hudson River School of painting and even the father of American landscape painting in general, it is perhaps fitting that Thomas Cole was an immigrant. Born in Lancashire England he moved to the U.S. with his family in 1818, when he was 18.

Cole spent a year on his own in Philadelphia before going on to join his family in Stubenville, Ohio, where he worked as a wallpaper designer for his father’s wallpaper factory. He later returned to Philadelphia for two years, and at the Pennsylvania Academy of the Fine Arts was inspired by the works of Thomas Birch and Thomas Doughty. He then moved to New York and devoted himself to the study of landscape painting.

He did a series of paintings after a sketching trip up the Hudson River that proved to be very successful and he began to accept commissions for works that displayed the grandeur and drama of the still largely unspoiled American wilderness.

Cole took several trips to Europe, refining his distinctly American art with the study of the European masters. He eventually settled in Catskill, New York. There is a Thomas Cole National Historic Site at Cedar Grove.

Cole had a distinct influence on other painters of the time, notably Asher B. Durand, whose famous painting Kindred Spirits was a tribute to Cole and his friend poet William Cullen Bryant; and the renowned painter Frederic Edwin Church, who was Cole’s only formal student.

Cole divided his attention between landscape commissions and large scale allegorical paintings of imaginary views that embodied philosophical ideals, such as a series showing The Voyage of Life, in four stages from childhood to old age.

The most famous of these is his grand sequence of five large canvasses depicting The Course of Empire, from the wilderness of an undiscovered continent to the pastoral beginnings of a young country to the heights of imperial glory and on to the inevitable destruction and collapse of an empire under its own weight.

Cole apparently preferred his ambitious allegorical works, but he is most often admired for his dramatic landscapes, with sweeping views of the wild and open country that still beckoned the American spirit of adventure and discovery.

The image above is alternately titled The Oxbow or The Connecticut River Near Northampton (larger version here and here).

It shows a long view of the American landscape, renewed and glowing in the sun as the darkness of a storm subsides.