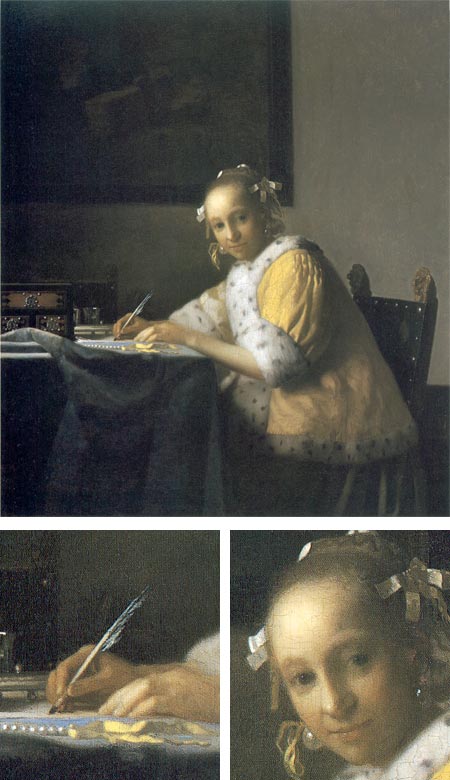 Ever since I became entranced on seeing his work at the Metropolitan Museum of Art in New York when I was younger, I’ve thought of Vermeer as less like other painters and more like an alchemist of light, an artistic sorcerer whose works transcend the boundaries of art and ascend into the realm of magic.

This impression has been reinforced each time I’ve encountered his irresistible visual spells; in New York at the Met and the Frick Collection, at the National Gallery of Art in Washington, D.C.; and at the mind-boggling show at the Met in 2001, which collected 15 of his strikingly beautiful paintings and put them in context with some 50 works by his contemporaries.

Have I gotten it across? If not, see my previous post about Vermeer and the Essential Vermeer web site.

Vermeer the artist and man is an enigmatic figure; there is little verifiable information about him, and much of what is discussed is the result of inference or conjecture; the art world’s perfect mystery man.

There are no surviving drawings attributed to Vermeer and only 36 generally accepted paintings (a few of which are still in question). Of these, 22 are in Europe and 14 are in the U.S. All of those in the U.S., except for one piece that is supposed to be in Las Vegas, but the actual whereabouts of which is unknown (What happens in Vegas stays in Vegas?), are in collections on the East Coast.

That number was reduced by one in 1990, when Vermeer’s The Concert was stolen from the Isabella Stewart Gardner Museum in Boston, along with 12 other works in what was the largest art theft in history.

Unless you live on the East Coast (or in Europe), seeing a Vermeer in person has always been a matter of travel.

From now until February 2, 2009, there is a rare opportunity to see a Vermeer on the West Coast of the U.S., as the Norton Simon Museum in Pasadena displays Vermeer’s A Lady Writing, on loan from the National Gallery in Washington.

There is a large version here on Essential Vermeer, along with an interactive feature (rollover image for notes) and analysis and background for the painting.

A Lady Writing is perhaps not the most celebrated of Vermeer’s works, it is still most definitely a fine Vermeer, a characteristic example of his pan-dimensional mastery of the magic of paint and light.

Most importantly, it is a beautiful painting.

Like many of Vermeer’s works, there is great room to spin stories into the enigmatic hints of the setting and surroundings, as well as the countenance of the sitter (as was done with the recent novel and film conjured up from his Girl With a Pearl Earring).

What events are suggested by this woman’s letter writing, the fine objects arrayed on her desk, the dark still life behind her, and her own equanimous gaze, directed squarely at the viewer, unabashed, unconcerned, and with a hint of a smile?

Perhaps the sitter’s seemingly complete ease with the act of being painted, and her subtle, confident smile, are attributable to suggestions that she is actually Catharina Bolnes, Vermeer’s wife.

I love the extraordinary way Vermeer has used delicately applied touches of pure white here, in the sparkling highlights of the ornate box, the studs on the lion-headed chair, famous for appearing in so many of his paintings, the shaft of the quill, the string of pearls on the table, the woman’s hair ribbons and, yes, her pearl earrings.

Look at the texture of the cloth and fur, the deep shadows both in the foreground and background, almost creating a secondary frame around the highlighted subject, the delicacy of her fingers, the miniature landscape formed by her hands, the table cover, pearls, inkwell and the horizontal streaks of light across blue cloth behind the ornate box.

Most captivating of all, as in most of Vermeer’s best work, is that timeless sense of captured light, in this case coming from the suggested, but characteristic, light of an unseen window to the viewer’s left, rendered palpable, liquid, pouring over the figure like a mist of gold.

It’s fascinating to compare this painting to Vermeer’s later work Mistress and Maid, in the Frick Collection in New York, which uses a very similar composition and many of the same objects.

If you’re in visiting range of the Norton Simon Museum, or if you’re near the permanent collections in new York or Washington, make a visit and immerse yourself in the crystalized stillness of Vermeer’s magical captured light.

3 Replies to “A Vermeer Comes to California”