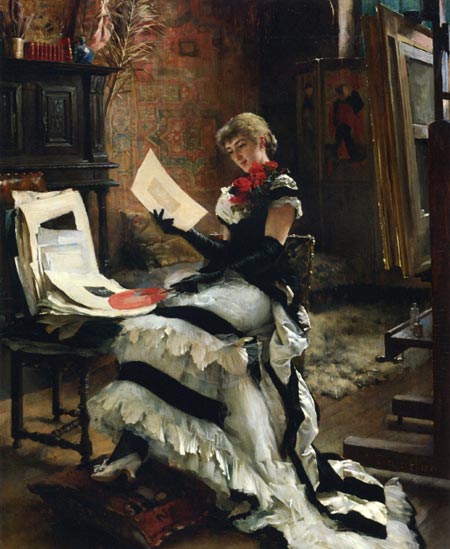 Albert Edelfelt was born to a Swedish family living in Finland in the mid 19th Century.

He found art training resources limited at the Imperial University in Helsinki, and went to the Antwerp Academy of Art to study historical painting for six months and then moved to Paris, where he found his artistic horizons broadened.

He was one of the first Finnish artists to receive international recognition; he associated with famous artists and hung out with the Russian Czars and their families when they ruled Finland.

He painted historical, romantic and religious works but was most known for his portraits, in particular his portrait of Louis Pasteur is well-known.

Edelfelt was undoubtedly influenced by the avant garde painters he encountered in the Paris galleries and cafes, but remained strongly influence from older masters like Valazquez and Goya.

His later work reminds me in a many ways of the American Impressionists, combining the bright color and free brushwork of the French Impressionists with a solid framework of Academic fundamentals.

I came across Edelfelt through a pair of excellent articles (here and here) on Michael Hirsh’s Articles & Texticles, as part of his wonderful series Parading My Ignorance, or Painters I should Have Known About.

After searching for Edelfelt resources on the web, Hirsh’s articles remain the best source on this exceptional artist and his work, including many preliminary studies, along with the finished paintings to which they apply. I’ve listed some additional resources below.

Edelfelt’s work is featured in an exhibit currently running at the National Gallery of Ireland called Northern Stars and Southern Lights: The Golden Age of Finnish Art 1870-1920 until February 1, 2009 (exhibit link via Art Knowledge News).