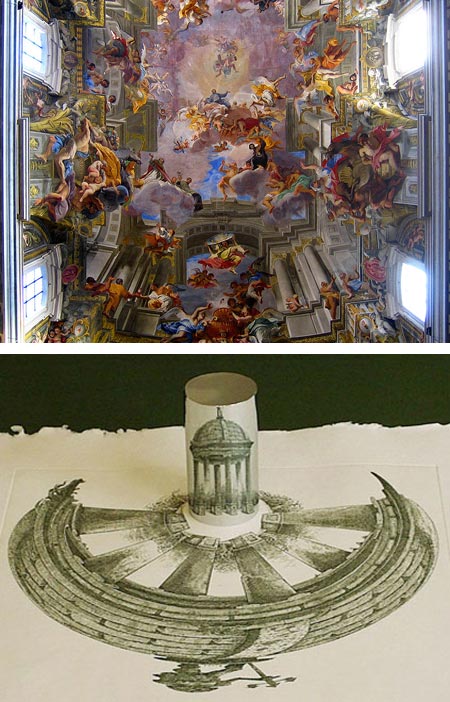 An anamorphosis is an image that is distorted in such a way that it only assumes the proportions of recognizable forms when viewed from a certain angle, or by reflection in a curved surface.

The term comes from the Greek anamorphoun, to transform. Anamorphic images have a long history in art. The earliest examples in Western art are found in Leonardo’s notebooks, though anamorphic images may have been developed in Chinese art around the same time.

Anamorphic perspective was employed in the illusionistic painting of church vaults, like those of Andrea Pozzo (image above, top, large version here) and Andrea Mantegna, but it has most often appeared in art as a curiosity or entertainment; or been used for the creation of hidden or secret images, requiring a matching mirrored surface to reveal their true nature.

Anamorphic images can be of as much interest to scientists as they are to artists, as NewScientist reports in their mention of a recent seminar on technical aspects of anamorophic art at the London Knowledge Lab; and an event at the National Gallery in London called Curious Perspective: Anamophosis in Art.

The NewScientist article is accompanied by a slideshow of anamorphic images.

The event at the National Gallery in London centered on the wonderfully enigmatic painting The Ambassadors by Hans Holbein the Younger, which is in their permanent collection. I devoted a post to The Ambassadors in 2006.

One of the notable modern applications of artistic anamorphosis that is missing from the NewScientist article (and many other resources) is the use of anamorphic images in sidewalk art, as exemplified by the work of Julian Beever and Kurt Wenner.

You can also add to the list the illusionistic point-of-view dependent paintings of Felice Varini and the modern continuation of traditional anamorphic art by István Orosz (image above, bottom). I’ve gathered some other anamorphic art resources below.