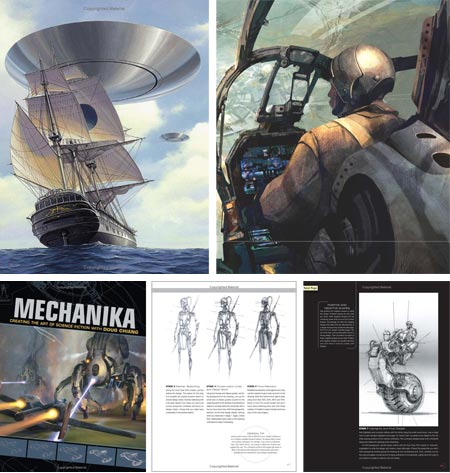 Chiang’s career actually started as a stop-motion animator for Pee Wee’s Playhouse. From there he moved into commercials, then to concept art and art direction for Rhythm and Hues and Industrial Light and Magic, and then to Lucasfilm.

At the time I wrote about him in 2005, he had produced his first book, Robota, co-written with Orson Scott Card, a sort of proto-movie/game that was never fully developed.

His web site, Doug Chiang Studio, is a left over from that time, not having been updated since late 2005, but it still has artwork on display from that project.

He then went on to found Ice Blink, a studio that brought together some of the best names in film concept art, including Marc Gabbana, Bill Mather, Mark Sullivan, Josh Viers, Dermot Power and others. Ice Blink ceased production in 2007, but the site still has galleries for the artists.

Chiang has since become part of ImageMovers Digital, a production company headed by Robert Zemeckis, whose first release will be A Christmas Carol with Jim Carrey, due in November of 2009.

In the meanwhile, Chiang has a new book out, Mechanika: Creating the Art of Science Fiction with Doug Chiang.

Rather than a portfolio, it’s a how-to book with tutorials on various aspects of sci-fi themed art, emphasizing Chiang’s specialties in robots, vehicles and spacecraft.

One Reply to “Doug Chiang (update)”