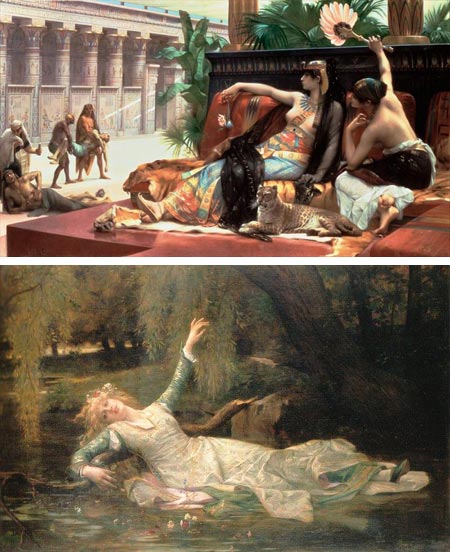 Alexandre Cabanel was a French Academic classical painter who showed notable skill at drawing at the age of 11 and entered the École des Beaux-Arts at 17. He quickly began exhibiting at the Paris Salon.

He was renowned as a portrait painter as well as a painter of historic, religious and classical subjects, and eventually became an influential teacher at the École des Beaux-Arts (at the same time that Jean-Léon Gérôme was appointed there) and a juror at the Salon.

He counted among his students numerous painters of note, including Jules Bastien-Lepage, himself tremendously influential, and Daniel Ridgeway Knight (less well-known, but a personal favorite about whom I’ll write more in a future post).

He indulged his audience a bit, with historic or mythological subjects that allowed him to paint beautiful, languorous nudes, as in his Birth of Venus (also here), which was bought by Napoleon III at the 1863 Salon, and Cleopatra trying out poisons on her lovers (above, top, also known as “Cleopatra testing poisons on condemned men”).

With his precise draftsmanship and superb command of painting technique, he was something of an exemplar of an academic painter, and like many of his compatriots, his reputation fell after his death and remained suppressed during the anti-Academic wave of the 20th Century Modernist art establishment.