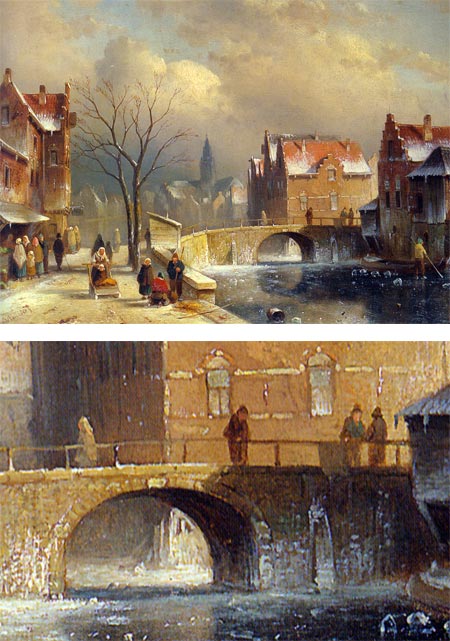 Charles Henri Joseph Leickert was a painter who would have been well suited to painting scenes of the freezing weather we’re currently experiencing in much of the United States.

Leickert was a Belgian born painter who lived and worked most of his life in the Netherlands. He specialized in winter landscapes, often with a “street scene” kind of view down a frozen river, lake or canal (image above with detail, larger version here). Most of his frozen river or lake paintings portrayed bustling activity, in which the citizenry would be out skating, ice fishing, pushing sleds filled with goods, and otherwise utilizing the frozen surface as a street.

He romanticized his scenes, frequently with towering dark clouds or brilliant dramatic lighting. He reveled in the eye candy of architectural details and the textures of brick, tile and stone.

He did balance out his oeuvre with images of summer, painting similar river or street scenes teeming with warm weather activity, and framing them with similarly dramatic skies filled with billowing clouds.

Leickert moved the Hague at a young age, and studied there under several Dutch landscape painters, including Andreas Schelfhout, who had a similar speciality in winter scenes, which had proved to be more popular than his other subjects.

The 19th Century Dutch art market seemed to have an appetite for winter scenes in which life appeared to go blithely on in spite of the cold.

Get the skates out.