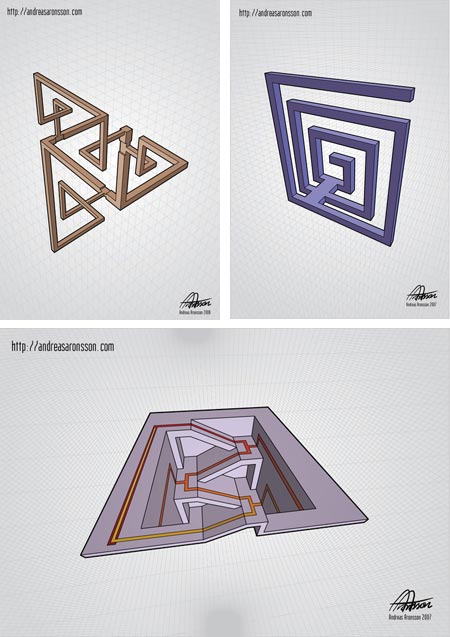 There are several types or projections, the most familiar are “perspective projection” (traditional linear perspective), in which lines drawn from the sides of parallel objects converge on vanishing points, and “oblique projection”, in which those lines remain parallel (the “Sim City” look).

In any of them it is possible to create an image that superficially seems reasonable, but would actually be impossible as a three dimensional object. Many of us are familiar with these in the form of traditional “optical illusions” and in the graphics of M.C. Escher.

Andreas Aronsson is, in his words, a “Professional ITâ€‘technician. Spare time multimedia experimenter. In Sweden.” He has a fascination with impossible objects, and regularly posts his own playful “Impossible Figures” to his blog.

These often take the form of objects (usually done in perspective projection) with shared sides or lines of connection that defy real-world geometry. They make for fun visuals; and examination of them generates a playful brain-tickle that gives us pause to reflect on the nature of the visual presentation of objects, what we take for granted and how easily our eye can be fooled into accepting the three dimensionality of lines in a two-dimensional surface (even if that surface is a screen).

You can flip through the posts on his site tagged with “Impossible Figure“. You can also read his page “About Impossible Figures” in which he talks about his fascination with them and his working process in creating his images.