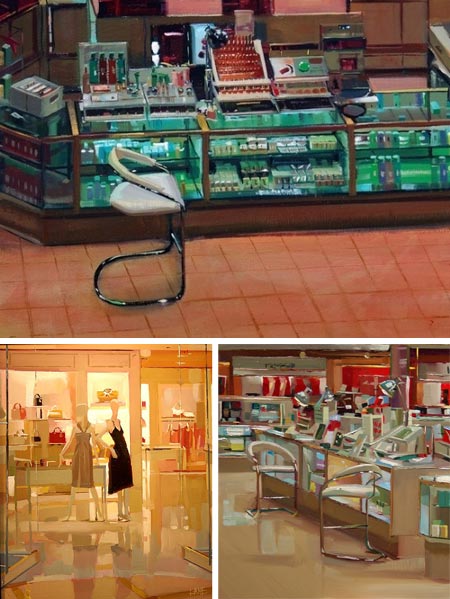 Utah artist Lane Bennion finds subjects for paintings were I, for one, would never think to look for them.

I’m fascinated in particular with his recent series of oils of interiors of department stores and malls. Here he finds intricate grids of light and shadow, geometric latticeworks of colorful planes, and compositions in which he meets the challenge of creating strong statements from the daunting complexity of a multiplicity of small objects.

Bennion’s older work shows a fascination with complexity as well, with compositions of toys jumbled in piles and street scenes with piles of trash and scattered objects. He also has a nice series of paintings of small carnivals and amusement arcades at night, which fall in with the way he revels in the artificial lights in the the store interiors, bright contrasts of light and dark, punctuated with the intense colors of painted surfaces.

You can view the work on his site through the link for Recent Works or the Archive, where you will also find some more traditional landscape subjects as well as outdoor scenes win which industrial or commercial structures and equipment take a prominent role.

Bennion studied at the University of Utah, under artists like David Dornan, Paul Davis and Tony Smith. He later graduated from the Medical College of Georgia with a specialty in Medical Illustration, though I can’t find reference to medical illustrations by him online.

In addition to his web site, Bennion maintains two blogs Studies in Oil and Notes on Making Paintings.. The former includes quick studies of areas around his home and small still life subjects, and the latter focuses on his gallery work, though it also includes subjects not found on his main web site. Both of them feature larger images of many of his paintings (click on the image in the blog post), that allow you to see the brushwork that is not evident in the smaller reproductions.