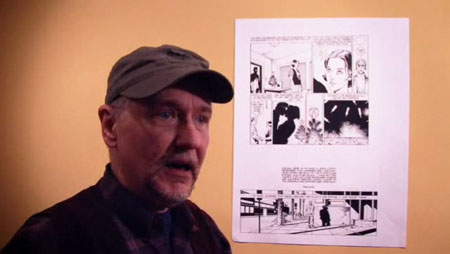 One of the leading items on the site is a series called PCR TV, featuring short segments, not quite interviews, more like expositions, by P. Craig Russell, the veteran comics artist who I mentioned in my recent post about his graphic adaptation of Neil Gaiman’s Coraline, as well as in one of the earliest posts on Lines and Colors back in 2005.

In the segments, Russell talks about various aspects of graphic stroytelling. Subjects in the four videos so far include Introductions, for which he uses as reference his work on graphic adaptations of Pelléas & Mélisande and Salmoe; and Parallel Narrative, for which he makes reference to his adaptation of Gaiman’s Murder Mysteries.

They are instructional both for comics artists and anyone interested in the craft and techniques of graphic storytelling.

The idea for the feature is a spin off of Harold’s recently completed documentary, Night Music: The Art of P. Craig Russell (Amazon link here).

The segments are being added to once a week. I don’t know how many there will be.

One Reply to “P. Craig Russell on PCR TV”