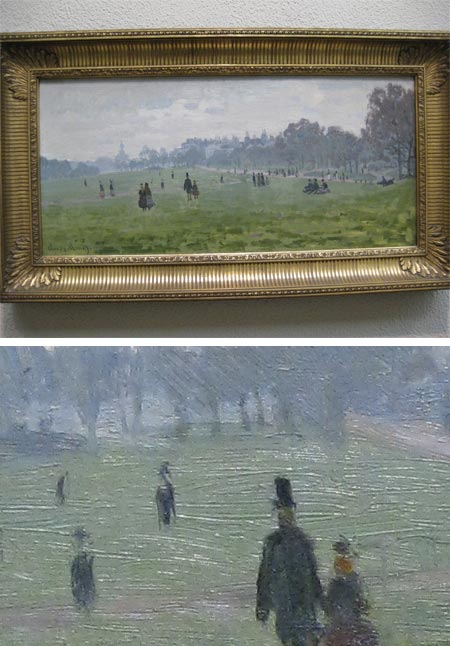 Some years ago I found out, much to my surprise and delight, that personal photography was permitted in most major art museums in the US and many in Europe. Museums like the Metropolitan Museum of Art, the Philadelphia Museum of Art, the National Gallery in Washington the the Louvre in Paris all permit you to photograph the artwork in their permanent collections (though not visiting or special exhibits, or works on loan).

The ability to take your own photos of artworks is wonderful for a number of reasons; not the least of which is that, if you work at it, you can take photographs with a small, inexpensive camera that show more detail, brush strokes and paint surface characteristics than the images in most art books and other reproductions.

It’s not that professional photographs taken under controlled conditions aren’t better, it’s just that they’re seldom made available at high enough resolution to show the detail. Occasionally an art book will show a few small detail crops, but even that is rare. In your own photographs you can zoom in at will, and take close-up crops the would never make it into an art book. You can also get photographs of wonderful but obscure works that rarely make it into reproduction.

It’s not easy, though. There are rules. Most museums that permit photography prohibit the use of flash or tripods. There is usually a policy statement about photography on the museum’s website in the section about visiting the museum or “museum policies”. (The National Gallery of Art in Washington actually allows flash photography, though they shouldn’t, and the Met permits tripods on certain days.)

Taking a well focused photograph of a painting in low light with a handheld camera can be a challenge, as my numerous blurry attempts attest, but you can do it with a little patience.

The good news is that it’s gotten easier in in the last couple of years, with new advances in camera technology, most importantly the new generation of cameras with Image Stabilization.

This is a group of technologies that reduce the blurring effect of camera shake by physically moving either the lens element or the image sensor in digital cameras to compensate for the movement of the camera body.

Be careful when shopping for this, however, there are a lot of spurious claims of “anti-shake” and “anti-blur” features that refer to simplistic mechanisms that simply use a high ISO (allowing more light to be read by the sensor in less time) that allows them to increase shutter speed; which in small consumer cameras can easily result in pictures that are so grainy and noisy as to be unusable. (This is a phony feature in much the same way that “digital zoom” is a phony feature, as it is essentially just a smaller crop of the original image with less resolution. “Optical zoom” is the real thing.)

Read reviews on camera enthusiast sites to ensure that the camera you’re choosing has actual mechanical image stabilization. The better manufacturers generally make it clear that they’re providing genuine image stabilization (though they often have different names for it). 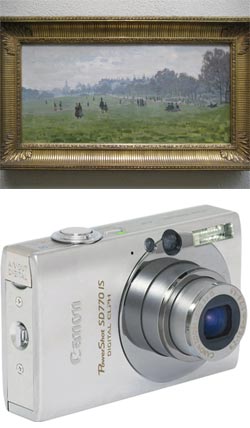 Even though I already have a small camera I like very much, a Canon A-95, I recently bought a new camera just for the purpose of taking photos in art museums, both because I wanted image stabilization and because I wanted something a bit smaller and easier to carry around.

After diligently doing my homework (and if you’ve read my article on pochade boxes, for example, you know I can be a bit obsessive about researching what I buy), I decided on a Canon SD770IS Digital Elph (Amazon link, image at left).

In looking for camera that would be best for the purpose, and still relatively inexpensive, I considered several cameras, read numerous reviews and, after leaning toward the Sony Cybershot DSCW150 for awhile (their image stabilization tech is branded “Sony Super Steady Shot”), settled on the Canon.

Both have received excellent reviews and provide the image stabilization feature in a small package (about the size of a deck of playing cards) at a reasonable price. These size cameras are sometimes called “sub-compact” or “shirt pocket cameras”.

Prices on digital cameras are ephemeral, changing by the minute based on retailer, marketing whims, and apparently alignment of the moon and planets. I found good prices on Amazon for the particular camera I was buying, but that even varied within the same model. When I bought my SD770, the Silver version was $160 and the black trim model of the same camera was $190, and at the moment it’s reversed, go figure.

It’s worth looking around even within Amazon or other large suppliers for multiple listings of the same product to see if you can find a better price. The camera review sites often list suppliers and prices at the bottom of reviews, but be wary of some smaller suppliers, look for reviews of the retailer before buying somewhere you haven’t purchased before.

There are a number of other small image stabilized cameras from Nikon, Panasonic and others (who often have different names for the image stabilizing technology) that would also be excellent choices. I don’t mean to limit your choices or suggest I have a definitive answer, I’m just trying to provide the benefit of my experience.

So far I’ve been very pleased. The image stabilization feature allows me to get about 2 f stops of improvement in ability to shoot unblurred images in lower light conditions, the color balance and image sharpness are good and the camera is small enough to carry without being distracted by it when I’m not actively taking pictures. I also got a Canon case for the camera that slips on a belt and has a magnetically closed flap that provides much easier access than a zippered case.

Bear in mind, though, that image stabilization is not a magic cure for blurred shots, just an improvement, an edge. Also, you can certainly take photos in museums with cameras without that feature, as I’ve done many times, it just takes a bit more work.

In either case the old advice still holds, keep your elbows in, breathe out before shooting and, perhaps most importantly, take multiple shots. Get a large memory card for your digital camera so you’re not intimidated about using memory space, they’re inexpensive now, and take several shots of everything. That’s perhaps the single most useful rule I’ve learned about photography, and one of the best things about digital photos, you can just throw out the files you don’t want.

There is also neat trick for making you own $1 camera stabilizer (Metacafe video). You may get funny looks, or even objections, from museum guards, but it’s not a tripod.

When learning to take photographs in museums, I also tested my shooting methods by taking two shots of each painting, not just because taking multiple shots is always advisable, but to see the results at different ISO settings, usually 200 and 400.

The higher ISO permits a faster shutter speed, hence less chance of blurring, but as ISO levels increase, so does noise in the photographs, particularly in these small cameras with tiny CCD sensors. Most small cameras do OK at 400, and it significantly reduces blur, but the discerning eye can tell the difference. At ISO 800 or above, most small cameras start to produce an annoying level of noise in the shot (hence the uselessness of the ISO-based “anti-shake” features in cheaper cameras).

The image above, top is a photo I took with my new camera of a charming little Monet in the Philadelphia Museum of Art called Green Park, London, with a crop below at full resolution. My original 10 megapixel image was 3648 pixels by 2736 pixels. The crop here is at full size at 450 x 300. Here is the painting on the PMA’s web site. The listing has a zoomable feature that shows pretty good detail; but not as good as mine, even though the original professional photograph, taken under controlled conditions with tripod and lighting, was undoubtedly much better.

Also, when photographing paintings in museums, be aware that using the zoom produces more sensitivity to camera shake. I walk up to a painting to take close ups.

There is also a tendency to use a little bit of zoom to compensate for the fact that small cameras often show “barrel distortion” when used at close range without zoom (the tendency for the image to look as though it’s spread out across a somewhat curved surface, as in my image above, top), but there are ways to correct that digitally.

Recent versions of Photoshop, in particular, have a great filter for just that purpose called “Lens Correction”. I’ve used that, plus the free transform tool, to correct my rather haphazardly composed shot at top into a nicely square version (left, top). I’m assuming that there must be consumer level image editors with similar features.

There are also software remedies for reducing noise in images taken with higher ISO settings, like Neat Image, which is a free Photoshop plug-in for Mac and Windows, and offers a stand-alone version for Windows (also free). I haven’t tried it yet.

Another factor to consider when taking photographs of artworks is “white balance”, an adjustment in color sensitivity to compensate for the different spectrums of light produced by the sun and incandescent, florescent and halogen lamps. Most cameras have an auto white balance feature, but if your images come out looking too yellow or too blue, etc., you may want to look into setting it manually by taking a white card into the museum and shooting it in gallery lighting at different white balance settings, to see which makes it look most like pure white.

If you have access to a major museum, it’s worth investigating their museum policies to see if photography is permitted. If you’re studying painting, in particular, close-ups of paintings by artists you admire can be an invaluable resource.

Unfortunately, the big disappointment is that many smaller, regional museums, like the Brandywine River Museum, The Michener Art Museum and the Montclair Museum, to name a few of my favorites, don’t permit photography of artworks at all. Some small to medium sized museums, like the Delaware Art Museum, have policy comparable to the larger museums. I don’t know exactly why there seems to be such a division in policies; perhaps small museums are more dependent on loaned works in their primary galleries.

7 Replies to “On taking photographs in art museums”