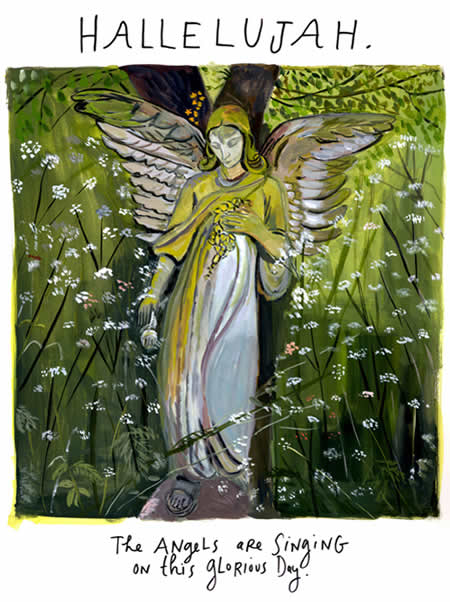 Maira Kalman is an American illustrator, designer and author, well known for her New Yorker covers and children’s book illustrations.

She was also a principal in the M&Co. design company, has done set design, fabric and product design, editorial illustration and a set of illustrations for a 2005 edition of the iconic guide to writing stye, Strunk & White’s The Elements of Style (images here). She also teaches graduate courses at the School of Visual Arts in New York.

Kalman’s illustrations often have a deliberately childlike quality, her figures posed with disregard for the conventions of perspective, heads askew, arms akimbo, hair floating in defiance of gravity; colors filled with textures and lines, in a recapturing of that “Rules? What rules?” innocence that artists often lose with training.

From the Spring of 2006 to the spring of 2007 she wrote a monthly illustrated blog for the New York Times called The Principles of Uncertainty, which has since been collected in a book.

Kalman is back at the Times with a new illustrated blog, And the Pursuit of Happiness, focusing on American Democracy and starting with a post about the recent inauguration of President Obama (from which the image above is taken).

There are also a series of interesting videos on Google Video of Kalman talking at the TED conference, discussing The Elements of Style and showing her Moleskine Sketchbook.