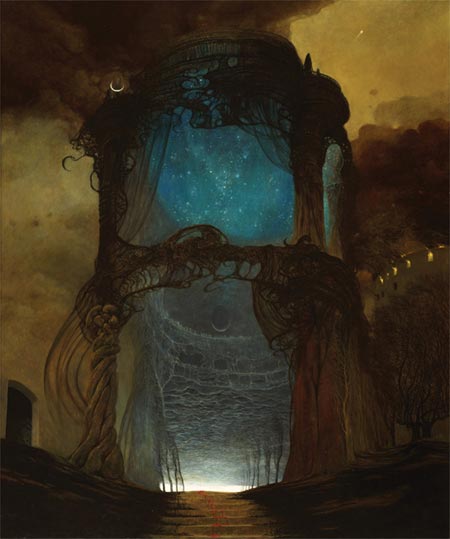 Zdzisław Beksiński was a Polish painter, sculptor and photographer known for his darkly dystopian fantastic realism.

His intricately rendered images of other worldly or post-apocalyptic landscapes, often populated with deathly or skeletal figures, are heavily atmospheric, as if filled with a mist of miasma and corruption.

He has a sequence of images of cathedrals dissolving into lattices of stone, disintegrating or floating into the air.

Scenes of desolation and darkness, however, are sometimes punctuated with light and color, hints that perhaps all is not consumed by the dark, perhaps most dramatically so in the image above.

The artist’s own life was marked by the darkness of personal tragedy. His wife died in 1998, when he was 69; a year later his son committed suicide and Beksiński was the one who came upon his body. The artist himself was murdered a few years later; stabbed to death by the teenaged son of his long time caretaker, to whom he had apparently refused a loan at one point.

Beksiński studied architecture in Kraków, went to work as a site supervisor and outside of his job began to experiment with sculpture and photomontage. His initial efforts as a painter were in non-representational works, but he eventually moved into the vein for which he is best known, showing the influence of the Surrealists and Dadaists, as well as fantastic realists like Ernst Fuchs and H.R. Giger.

In his later career, Beksiński became interested in digital photomontage, and you will often find examples of that work mixed in with his paintings.

Beksiński’s art is still represented by his agent through the Belvedere Gallery and the official web site they maintain for his work.