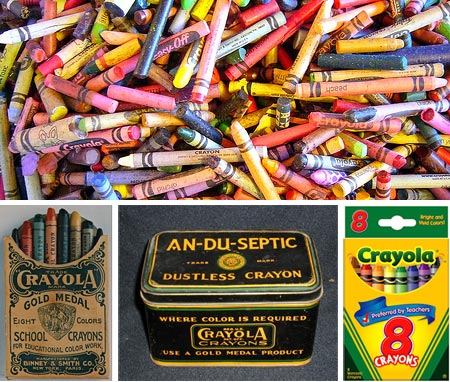 Ahhh, think about Crayola Crayons, those wonderful waxy knobs of color, wrapped in shreds of peeled paper, that for so may of us are integral to our first experiences in making art.

Wax crayons are a fond symbol of childhood (and/or or child rearing) for many of us. That wonderful smell (is there a sweeter perfume?) can instantly transport us back in time; but how soon we leave our crayons behind, forgotten in the dusty toy boxes of our early youth.

The thought of children’s wax crayons as a serious artistic medium would strike most artists as absurd. It’s simply “not done”; but, like many other mediums that are considered “inappropriate” by the arts establishment (ball-point pen for instance), they are the subject of narrow classification. Anything that makes marks on a surface can be a tool for visual art. Contemporary artists Don Marco and Tiona Marco (not related, but teacher and student) use Crayola Crayons as their primary medium.

Though there are other manufacturers of wax crayons, like Rose Art and Dixon Ticonderoga (Prang), Crayola dominates both the market and the history of modern wax crayons.

Wax crayons are not dissimilar to other colored drawing media — a pigment suspended in a binder; in this case, paraffin wax, a petroleum derivative.

They are perhaps not intended to be as long lasting as other mediums (though wax has been useful as a binder for art materials for hundreds, if not thousands, of years), or to have as expensive or “pure” a pigment content; but as with any medium the important factor is the result achieved.

The word “crayon” has other connotations in art, sometimes simply referring to a stick of almost any drawing material, but usually referring to chalks (“craie” is the French word for chalk).

Chalk crayons were famously used by Baroque and Rococo artists like Peter Paul Rubens and Antione Watteau in the “aux trois crayons” method of drawing with black, red (sanguine) and white chalks on toned paper; a method particularly effective in figure drawing and portraiture (see my post on Sanguine Drawing).

In particular we associate the term crayon with the chalks and graphite sticks in a gum binder created around the turn of the 18th Century by Nicholas Conté, and known as “Conté Crayons” (see my post on Pencils).

Wax crayons may actually be more similar in their application to mediums like oil pastels, also called wax oil crayons, that are a combination of pigment, non-drying oil (as opposed to the drying oils used in oil paint) and a wax binder.

Unlike oil pastels, which get a modicum of respect, wax crayons seem firmly relegated to the toy box instead of the paint box; but perhaps that’s an advantage.

Maybe it’s a plus that they carry that connotation with them, and that picking one up immediately connects with that part of our past in which we were unrestricted by artistic convention, free to indulge in the playful whims that we lose touch with all too easily as adults. Did we ever feel “creatively blocked” as children playing with crayons? Hardly.

Maybe we would all benefit from working, however briefly, with a medium that comes with a built in connection to the wide-eyed innocence and playful explorations of childhood.

A box of eight is a little over a dollar and you can buy them just about anywhere (worth the price just for that wonderful smell).