As I pointed out in my previous post about Gustave Caillebotte, he is one of my two favorite underappreciated French Impressionist painters (along with Alfred Sisley).

Though he was not the draughtsman Degas was (few were), or as facile with brush and color as Monet or Pissarro, Caillebotte nonetheless epitomized many of the characteristics we associate with French Impressionism, the bright strokes and dabs of pure color, optically blended into luxuriously beautiful images of gardens, rivers and brightly dressed members of the leisure class enjoying the sun.

It is in his differences from the other Impressionist painters, though, that he resonates most strongly for me. I think it’s in his subtle appreciation for shadow, soft light, rain, fog and snow that he displays his greatest visual poetry.

He also differs form the other French Impressionists in that his approach often leaned more toward realism; putting him, perhaps, in the company of the American Impressionists and others who adopted the Impressionist palette and free brushwork, but without abandoning the realist underpinnings from Academic painting that Monet and Pissaro rejected. He was also one of the first painters to be fascinated with and influenced by then new art of photography.

Caillebotte was an engineer by training, but also studied at the Ecole des beaux-Arts, and became acquainted with Degas, Renoir and Monet early on. He became a supporter and patron of his friends’ work, using his considerable family resources to purchase paintings for himself (often at prices well above their market value, basically to help them survive and keep painting) and to organize the Impressionist exhibitions in Paris.

It was Caillebotte’s eventual donation of his collection of Impressionist works to the French government, which at first was refused at the urging of the conservative Academy, and only later accepted in part (40 of the 60 offered), which now forms the core of the Impressionist collections in the Musée d’Orsay.

Many of the remainder (lesser in terms of quality) were sold to American physician and art collector Albert Barnes, and are here in Philadelphia in the collection of the Barnes Foundation. Others are in museums and collections around the world.

His own work received less respect after his death than the works he collected, but his reputation is being restored as public appreciation for his work gains ground.

Gustave Caillebotte: Impressionist Paintings from Paris to the Sea is an exhibition currently at the Brooklyn Museum (until July 5, 2009). It features about 40 paintings showing a range of Caillebotte’s work and subjects, though it focuses in large part on paintings of activities on and around the Yerres and Petit Gennevillers rivers near his family’s estates, like Skiffs (above, top, sometimes called The Oarsmen).

There is a catalog accompanying the exhibition (hardback only, I believe this is the same book on Amazon).

Much to my delight, the exhibit includes one of my favorite paintings, Yerres Riverbank in the Rain (above, bottom, larger version here, unfortunately not well reproduced; smaller but a little better here).

This is not a dramatic Impressionist painting, busting with sunlight and brilliant color; quite the opposite, in fact — subtle, quiet; a gentle suggestion of a painting, with the soft light and subtle colors of a summer shower, but so evocative you can smell the rain. 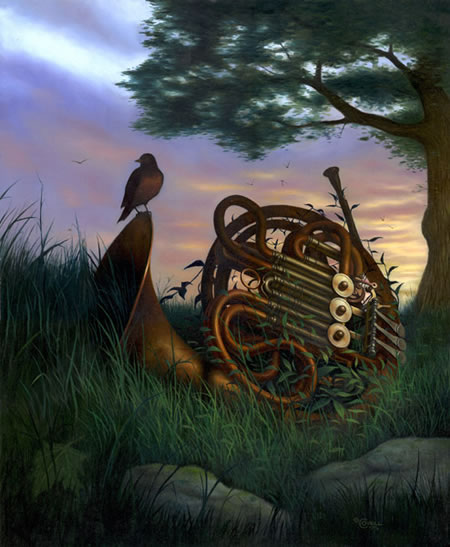 His web site has sections devoted to illustration and storyboards as well as concept art, characters and environments. Covell has done concept design for companies like Vivendi Universal Games and Genuine Games.

Covell’s style ranges from softly atmospheric, to sharply rendered to whimsically sketchy. There is also a section of nicely direct life studies on the site.

Covell’s professional work can be seen in the upcoming Volume 16 of the Spectrum collection of contemporary fantastic art. You can see some of his work at the Copro Nason Gallery (via Artnet).

Covell also maintains a blog in which he posts about his work in progress (which includes his recently born son). 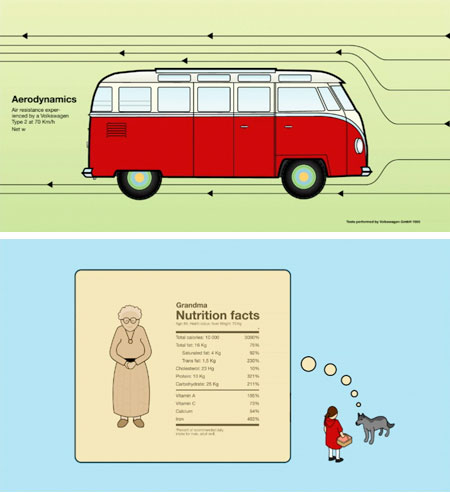 Slagsmålsklubben – Sponsored by destiny is an animation by Tomas Nilsson, in which the classic fairy tale of Little Red Riding Hood is reinterpreted as a series of animated infographics.

The video traces, in that wonderful isometric projection style of vector art common to modern infographics, not only Little Red Riding Hood’s route to Grandma’s house and the events that transpire there, but lots of “info” about stuff on the way, from wild animal density of the forest to the specs for a classic VW microbus as it passes by.

The info also includes such tidbits as the nutritional content of one Grandma, presumably for the wolf’s benefit. 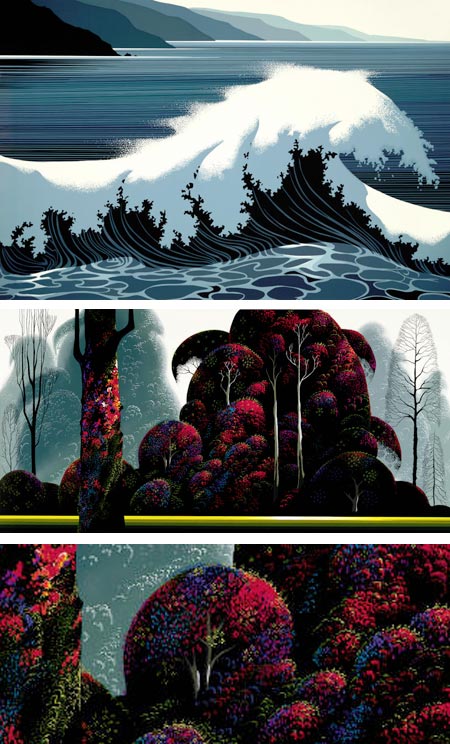 I first wrote about illustrator, animation art director and painter Eyvind Earle back in 2006.

Since 2007, I’ve been waiting for a new site promised to be “Coming soon April 2008” at eyvindearle.com to materialize; but as the promise is unchanged as we approach April of 2009, that looks unlikely.

Fortunately, in the meantime, some additional Eyvind Earle art resources have appeared on the web.

The best is still Gallery 21, who I believe are the official representatives of his work. There are galleries of Originals and Serigraphs, as well as Books, Videos and a Chronology of Earle’s career.

There are now other galleries and unofficial sites, and I’ve listed some resources below.

Earle was noted in particular for his stunning design work on Disney’s 1959 feature, Sleeping Beauty, as well as major contributions to Peter Pan, Lady and the Tramp and a number of shorts. (See this 2006 article about Eyvind Earle and Sleeping Beauty on Cartoon Modern.)

He was awarded the Winsor McCay Award (named after pioneering animator, illustrator and cartoonist Winsor McCay) for lifetime achievement in animation at the 1998 Annie Awards.

Some of Earle’s artworks were among the 250 pieces of original animation art recently returned to Disney after being misplaced in storage following an exhibit in Japan five years ago.

There are books of his work, as well as an autobiography, Horizon Bound on a Bicycle.

Earle was a dazing designer and painter. In addition to his beautiful work for Disney, he painted strikingly graphic and graceful landscape paintings, with compositions that blend the lively draftsmanship of mid-20th Century animation design and the elegant compositional influence of Japanese woodblock prints (images above, and middle, with detail at bottom).

His handling of color is just as amazing as his compositions, taking chances on color combinations and juxtapositions that would simply not work in lesser hands.

“From Washington to Obama in Less than 4 Minutes” is the description line on this little amusement by “HerBunk”, the handle of a YouTube contributor who describes himself as “an old retired guy who likes to play with computers”.

In it, he morphs the likenesses of all of the American presidents to date from one to another in sequence.

The other thing that makes it interesting to me is the fascinating way that morphing between faces points out the way we distinguish faces from one another, and provides a few clues about the nature of portraiture.

For another example, see my post about a video that uses similar morphing, in this case all paintings, to demonstrate The History of Women in Art.

The only disturbing thing about the presidential history morph sequence is that the last few are genuinely creepy.

[Via The Public Reader]

Link: From Washington to Obama in Less than 4 Minutes (YouTube) (also here)

For lovers of all kinds of art, the internet just keeps getting better and better.

Grandma’s Graphics is a little treat that popped up recently with some vintage public domain illustration. Though some of the images aren’t of as high reproduction quality as one might like, it’s still worth a look, even if it’s just to familiarize yourself with some art you might not have seen, and seek out printed copies of better quality later.

The collection, mostly pen and ink of course, given the eras, includes some of Harry Clarke’s intricate penwork, and illustrations for Alice’s Adventures in Wonderland, and Through The Looking Glass by Sir John Tenniel (above, top) and Harry Rountree (above, bottom), one of the few who doesn’t wilt in Tenniel’s presence when tackling Lewis Carroll’s flights of fancy. (See my post on Sir John Tenniel.)

I love the fact that the Colouring section includes two of Tenniel’s more intricately detailed (and non-coloring book like) illustrations, including the image above (larger version here). (You can see my own nod to this particular drawing by Tenniel in this cartoon from my book of Dinosaur Cartoons.)