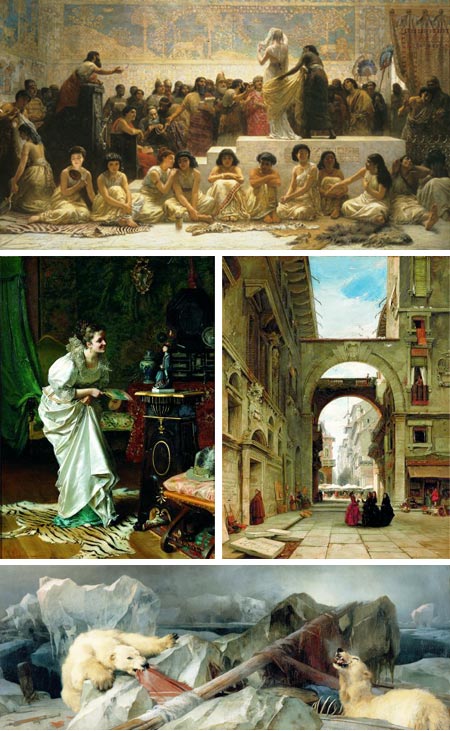 Victorian art in particular, I think, suffered at the hands of the modernist art establishment of the late 20th Century, who considered it the dry and repressive standard from which modernism had “liberated” art.

As a result, much of the art from the time was marginalized and trivialized for the better part of half a century, and is still denigrated in modernist circles.

In general, however, there is a revival of interest in Victorian art, with its fascinating glimpses of a complex period, historical events and engaging stories, as portrayed by some masterful painters.

Many of them are dramatically large in scale (you can see some photographs of the exhibit being installed here).

Though I was a bit disappointed in my hope for more of the heavy hitters from the period, I was still delighted to see the show and to be introduced to a few artists who were unfamiliar, but terrific.

It was particularly interesting to note in Frith’s piece, that a painting of an apparent high level of finish when viewed from a few steps back reveals pencil construction and perspective lines on close inspection.

Tito Conti’s exquisite small scale paintings of women in glowing gowns, like Paying Her Respects to His Mightiness (image above, middle left), reminded me of William Holman-Hunt’s highly finessed detail painting, and John Syer surprised me with the loose, painterly handling of his Welsh Drovers. See the slideshows listed below for more images from the exhibition.

Paintings from the Reign of Victoria: The Royal Holloway Collection is on view at the Delaware Art Museum until April 12, 2009.

There is a catalog from the exhibition (link to Delaware Art Museum store, I could only find the hardback on Amazon).

Museum admission is currently free on Sundays. While there, don’t miss their collection of American illustration, an extended exhibit of which is on the second floor.

For those not within reach of the exhibition, there are an increasing number of resources on the web for Victorian art. I’ve listed a few at the bottom of the links below.

An excellent book on the subject is Victorian Painting by Lionel Lambourne.

Link: Paintings from the Reign of Victoria: The Royal Holloway Collection at Delaware Art Museum (to 4/12/09)
Photos of exhibition installation
Overview on ASI Exhibitions
Slideshow of images from the collection on News OK
Slideshow of images on Royal Holloway Info Server (unfortunately not the best)
Images from collection on International Art Treasures
Review of the exhibition (from its stay in Phoenix) on BAM's Blog