I’m usually not a fan of the destructive ego stoking defacement of buildings that is grafitti, at least not until it gets sophisticated to the point of impromptu wall murals (and I’ll point out that the illusionistic sidewalk art I like is done in chalk and washes away); but defacement aside, I’ll make an exception for this.

MUTO is a frame by frame animation in which the “cells” are grafitti drawings on building walls, and the canvas is sections of the cities of Buenos Aires and Baden.

The artist, known only as BLU, has painted and repainted sections of wall with drawings that, photographed in sequence, make an animation.

If you can put up with the shakiness inherent in making a stop-motion animation with a hand-help camera, and the occasionally creepy tone of the story (such as it is, actually more of a stream-of-consciousness narrative), the interaction of the animations and the environments in, through, around and on which they play out, is fascinating and genuinely different.

[Via Digg, via SoulPancake] 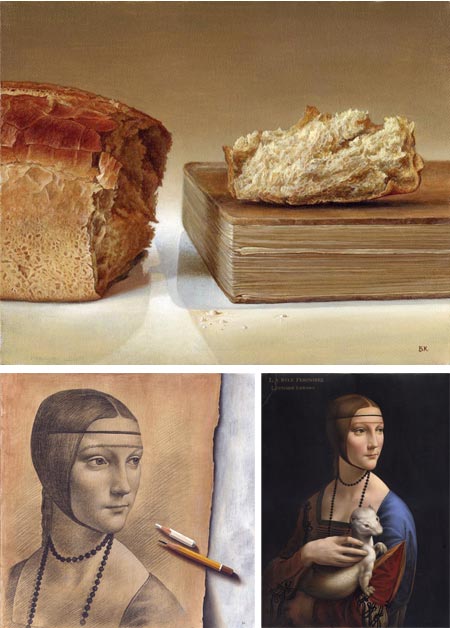 Boyko Kolev is a Bulgarian artist about whom I have little background information. Most of what I know is simply gleaned from his web site, which offers no biographical profile, and his space on deviantART, which has a few odds and ends.

His painting style might be classed as hyperrealism, though he seems to play with the very fact that he is chasing that state of realistic illusion in art by offering up images that reference other images, or the act of creating other images.

My favorites of his, though, are his simple, directly and keenly observed still life subjects, like his painting The Bread (above, top, larger version here); in which his delicate handling of textures, subtle colors and deft suggestion of the interplay of shadow and light immediately put me in mind of the early still life studies of bread by Salvador Dalí. I later saw that Kolev had, in fact, done a bread painting directly inspired by Dalí’s bread paintings (and here).

Kolev has spent time investigating the work of past masters, including painting replicas of works by Van Gogh, Monet, Klimt, Bruegel, Correggio, Vermeer and, others. (See my posts on Klimt, Correggio and Vermeer.)

I particularly enjoy his painstakingly detailed replica of Jan van Eyck’s beautiful Portrait of Giovani Arnolfini and his Wife (See my post on Jan van Eyck in which I talk about this remarkable painting.)

Kolev has a special fascination with the works of Leonardo da Vinci, and has done several replicas of Da Vinci’s works, as well as referencing Da Vinci’s work in many of his illusionary self-referential paintings, like his oil painting of his own preparatory sketch (above, bottom left) for his replica of Da Vinci’s wonderful Lady with an Ermine (bottom, right, Da Vinci original here).

When viewing Kolev’s web site galleries, take note that there are multiple pages, both in original paintings and replicas, accessed by numbered links at the bottom of the thumbnail area.

Urban Sketchers is a group blog that I first wrote about last November.

Since then, hundreds of additional sketches have been added; and the blog’s layout has been updated, with a wider format and better organizatation (though I still wish they would somehow limit the Flickr slideshow widget at page bottom to a single page and make the “Older Posts” link bigger).

Urban Sketchers has kept the tagline of “See the world one drawing at a time”, and continues to a be a source of constant delight, filled with location sketches in a variety of media, size, approach and degree of finish.

There is an increasing list of contributors, as well as an impressively extended list of represented cities and countries from around the world; though much of the content is still provided by a core of frequent contributors, including founder Gabi Campanario. (Sadly, Gabi’s recent sketches have been chronicling the impending demise of the Seattle Post-Intelligencer, a terrific newspaper; image above, top right)

Many of the images are linked to larger versions, and most of the contributors have their own blogs and web sites to which you can go for even more sketches and finished work. Some of them are profiled on the Meet the Correspondents page, but others are worth tracking down through links at the bottom of their posts, or looking up via Google.

Updates are frequent and you can check in with Urban Sketchers any day and find fresh new sketches to enjoy and take inspiration from. In fact, it’s sometimes hard to check in frequently enough to keep up with the new posts. 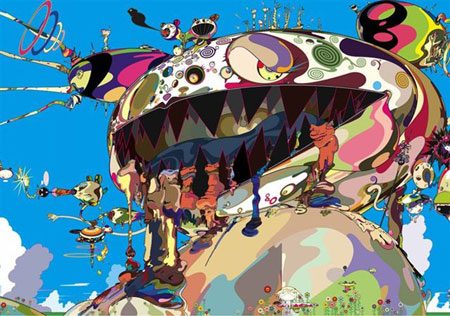 Liz Lomax describes herself as a “three dimensional illustrator”. Before assuming that means illustration created in a 3-D CGI application, step back and think in more immediate, real-world terms.

Lomax creates her stylized, whimsically exaggerated images as small scale sculptures, which she then places in environments that she also hand crafts, and photographs the result to achieve her illustration image.

Much of her work is based on likenesses, or more accurately, caricatures, of well known individuals, including pop music stars like Sting, Amy Winehouse, Michael Jackson and the Rolling Stones, movie personalities, political candidates and various other newsmakers.

She also does theme based editorial illustration, with conceptual interpretive images much in the vein of many contemporary illustrators, but realized in her hand-sculpted models and environments.

Lomax starts with a sketch, and her sketches have a nice feeling to them that would suit being followed up as a finished illustration in traditional media; but she then takes them to the third dimension, modeling the figure, tweaking the likeness (which must work from several angles), then painting, finishing and arranging the sculpted figures in 3-D environments, much like dioramas, for the final photograph.

Her client list includes major publications like The Boston Globe, Advertising Age, Newsweek, MAD, The new York Times, Rolling Stone, The Wall Street Journal and many others, as well as a number of advertising agencies and commercial accounts.

There are a variety of her works on her web site in various categories, including some done just for fun.

The Telegraph site has a slide show of her work and some of her working models. There is a video of her working process for a sculpture of Noel Gallagher, and her blog shows work in progress, discusses her working methods and has photos that show the sculptures to scale as she works on them.

There have traditionally been only two images accepted as true portraits of the man who is generally acknowledged as the greatest writer in the English language, William Shakespeare.

One is his monument bust in the Holy Trinity Church in Statford-upon-Avon (left, 4th down), and the other is the famous engraving by Martin Droeshout (left, bottom) that was used as the cover piece of the First Folio of Shakespeare’s work (and has been repurposed in a gigazillion ways since). Both of them were done after his death in 1616.

On Monday, the chairman of the Shakespeare Birthplace Trust, Stanley Wells, unveiled a painting that has been in the house of the Cobbe family outside of Dublin for centuries, that is now suggested to be the only image of the bard painted from life (image at left, top).

This status was previously held, but always in question, for the painting called the Chandos Portrait, attributed to artist John Taylor (left, third down), but that claim has been discredited to a large extent.

The painting from the Cobbe family shows an energetic and bright eyed man, younger than the portrayals we commonly see, most of which have been based on Droeshout’s engraving.

In this portrait, Shakespeare would have been 46 at the time, six years before his death.

The painting bears a resemblance to a painting once thought to be of Shakespeare and attributed to Flemish painter Charles Janssen, that is in the National Gallery in London (left, second down).

Though this painting has been established to have been of another person, and to have been altered sometime before 1770 to make it resemble Shakespeare, it is what prompted the Alec Cobbe to begin inquires among Shakespeare scholars and art experts to see if his family’s painting was, indeed, of the great playwright.

Though the jury is not in, sophisticated dating techniques and the opinions of the experts in both camps suggest that this may, in fact, be the only portrait we have of Shakespeare painted during his lifetime.

Unfortunately, in all of the media attention the painting has received, I can find no mention of an attribution, or even a suggestion of a probable artist’s name. I suppose that may remain a mystery, like much about the bard himself.

Though out of context (and though by “paintings”, Hamlet is referring to Opheila’s makeup), the issue of identifying portraits brings to mind:

“I have heard of your paintings too, well enough; God has given you one face and you make yourselves another,…”