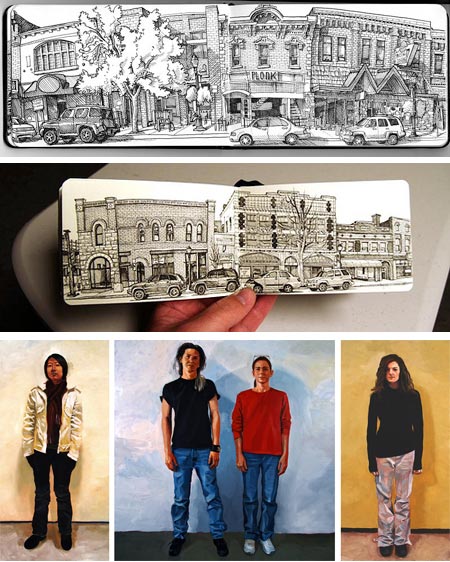 Inspired in part by Ed Ruscha’s photogrphic series of “Every Building on the Susnset Strip” and Matteo Pericoli’s panoramic drawings in his book Manhattan Unfurled, artist Paul Heaston decided to draw every building on Main Street in the historic district of his hometown of Bozeman Montana.

Some of us who have never been to Bozeman think of it as a literary location, having been the setting for part of Robert Pirsig’s remarkable Zen in the Art of Motorcycle Maintenance, and a surprising number of other cultural references, including being the nominal location of the Star Trek: First Contact movie (co-written by Bozeman native Brannon Braga). It is also the site of Montana State University and is apparently rich with other colorful points of history.

Heaston focused his interest in the historic architecture of Bozeman, the town’s Main Street, from Grand to Rouse Avenues, and as a challenge to himself, drew every building on every block in that area, on both sides of the street, from direct observation in his Moleskein sketchbook (which he apparently filled exactly, without intending to). The project started in October of 2008 and just wrapped up on May 10 of this year.

It’s interesting to note that the seasons changed over the course of his project, giving it in interesting dimension of time as well as space.

Heaston’s approach, is an immediate and direct drawing in pen (that I assume is a fine point marker like a Pigma Micorn or Staedtler, though I didn’t find a mention of drawing instrument), with a casual feeling, even while enjoying the portrayal of surface textures. He even seems to have a cavalier disregard for making his architectural lines straight.

In some drawings, he winds up with what looks like curved perspective – like a photograph through a wide angle lens (which some have suggested is truer to the way we actually see than traditional “straight line” perspective).

The casual feeling of his drawings brings to mind the sketchbooks of Robert Crumb and Chris Ware.

I came across Heaston’s Bozeman Main Street Project on Urban Sketchers, where he is a correspondent. There is an article about the project, as well as one about its completion. The entire project is posted as a Flicker set.

Heaston has a web site with galleries that include other drawings and graphics, as well as his oil paintings. The latter are largely a series of gestural, painterly standing portraits, that are informal both in composition and the sitter’s (stander’s?) attire.

Heaston also maintains a blog, three letter word for art, on which you will find many other sketches and the stories behind them.