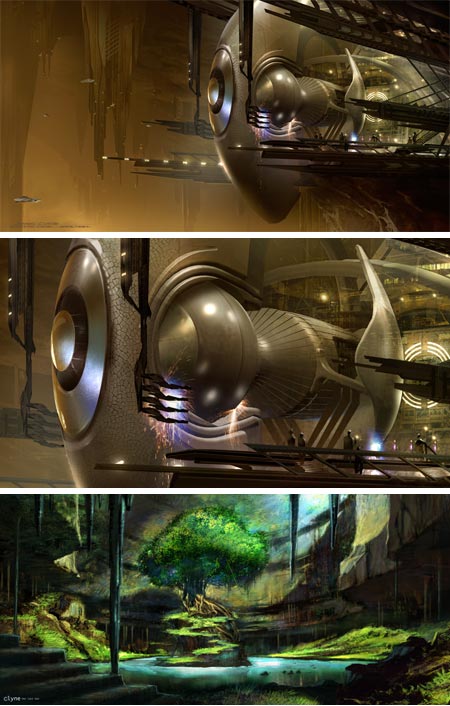 I first wrote about conceptual illustrator James Clyne back in 2005, and then again in 2006 when he formed a collaborative studio with concept designer Feng Zhu as Gamma Ray Studios, which is no longer in operation.

Since then, Clyne has extended his resume and added to his online project gallery with concept art for feature films like The Poseidon Adventure, X-Men 3: The Last Stand, Star Trek (image above, top, with detail, middle) and an underrated and undercirculated science fiction film called The Fountain (above, bottom).

Clyne’s atmospheric, detailed and and imaginative concept images start with traditional media, markers and pens, rendered on vellum, and then move into digital applications like Photoshop for final renderings as digital paintings.

There are 5 instructional DVD’s on the Gnomon Workshop in which Clyne details his techniques. As I also mentioned in a previous post, Clyne was an instructor for the Gnomon Workshop: Live! 2008 event. I think he is scheduled to be part of this year’s Gnomon Workshop Live!: 2009 event, which takes place in Hollywood on June 27 and 28, 2009, but I haven’t been able to confirm that yet.

The io9 site has recently featured some additional galleries of Clyne’s work, with his designs for Star Trek, and several more general articles, including a collection of his Sweeping Vistas .