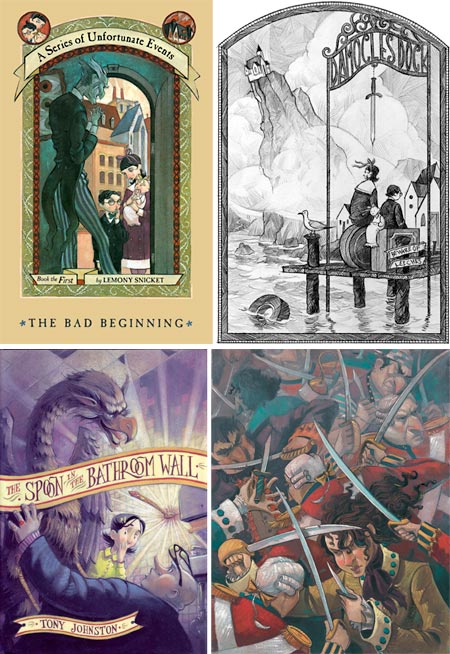 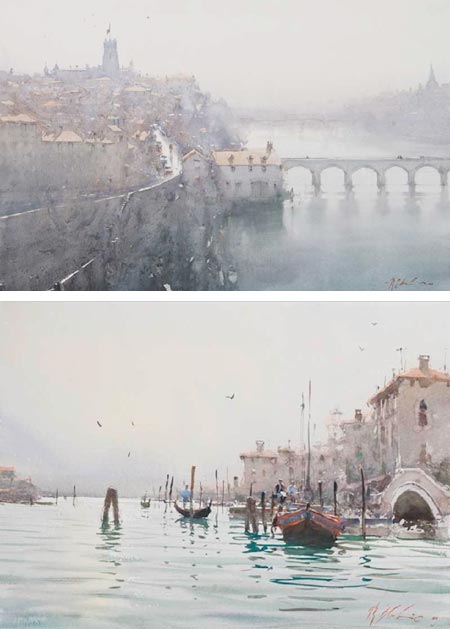 Joseph Zbukvic is a Croation born artist living and working in Melbourne, Australia.

Zbukvic’s atmospheric, emotionally resonant watercolors have a wonderful characteristic of being simultaneously loose and crisp — loose in that he suggests rather than elaborating, and crisp because of his masterful command of edges. He has a highly refined sense of when to define a sharp edge, and when to let an edge disappear into mists of hazy textured color.

His landscapes and cityscapes, often of locations in Europe, are highly evocative of the place, without being rigid in their portrayal of details and specifics. He portrays the kind of visual image we might call up as a memory of a fondly remembered place, both hazy and sharp.

Many of Zbukvic’s paintings are done on location. His palette is often muted and understated, though sometimes punctuated with higher chroma passages. Zbukvick enjoys dwelling on misty atmosphere, rain and overcast shadow, as well as the haze of bright sunlight.

Zbukvick gives highly regarded workshops. This year’s schedule includes dates in France, Spain and Canada as well as Australia. His DVD, Watercolor Impressions, includes scenes from previous workshops; you can see a short excerpt by clicking on the second image on the workshop page.

I also came across this video clip from Inside Joseph Zbukvic’s Sketchbook, related I think to a June, 2008 cover story on him in Watercolor Artist magazine.

In addition to his workshops, Zbukvick also teaches at Charles Sturt University and the Mitchell School of Arts.

Some of the galleries that represent his work have additional galleries in which you will find images not on his site (and/or larger reproductions, particularly the first two listed).

Addendum: Adebanji Alade wrote to let us know about Zbukvic’s book Mastering Atmosphere & Mood in Watercolor: The Critical Ingredients That Turn Paintings into Art. Unfortunately, it is out of print and resellers seem to be asking high prices for it at the moment. Perhaps something to keep an eye out for.

Like anyone who works with painting, design or color in any form, I occasionally struggle with color; not just with mixing and choosing colors, but with the actual perception of color, the ability to answer the seemingly simple question “What color is that?”

All of my studies of color and color theory have led me to the inexorable conclusion that the single most important rule of color is that the human perception of any color is almost entirely dependent on adjacent or surrounding colors.

This is the basis of Eugene Delacroix’s wonderful quote: “I can paint you the skin of Venus with mud, provided you let me surround it as I will.”

While this principle is visible to the trained eye, both in painting and in life, it is never made more clear than in deliberately created optical illusions, like the e-Chalk color perception illusion I wrote about in this post.

This image shown here is one of the most striking illustrations of this principle I’ve seen.

I came across it in a post by Phil Plait on Bad Astronomy, who indicated the the original is from Akiyoshi Kitaokaâ’s optical illusion website (scroll to the bottom of the page).

Anyone with normal color vision will see a series of green and blue spirals. There would be little chance that a casual observer would suggest that the blue and green might be the same color, and yet they are.

In the second detail, you can see the Photoshop foreground/background color blocks where I have used the Eyedropper tool to pick one color out of the “green” band, and the other out of the “blue” band.

The color is actually a green leaning toward blue. Richard Wiseman used Photoshop to change all of the values except the green and blue bands to black, and you can see a detail of the result in the bottom image. There is also a simplified version of the illusion here.

So the next time you’re looking at a color an think “that’s green” or “that’s blue”, well, maybe it is, maybe it isn’t, depending on the surrounding colors.

Link: A group of green and blue spirals - Akiyoshi Kitaoka
The blue and the green - Bad Astronomy
The best optical illusion I have seen all year - Richard Wiseman 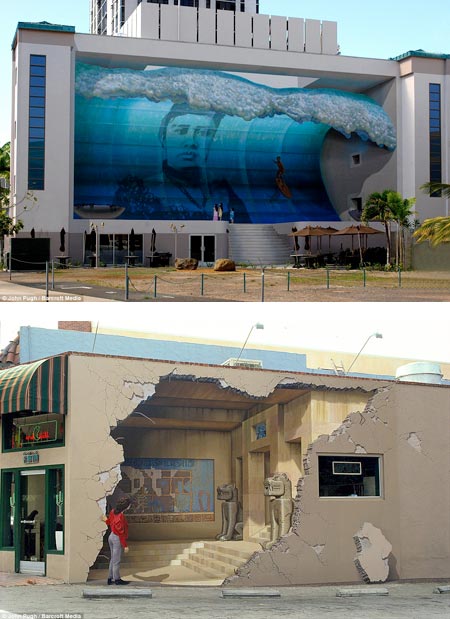 Spanish painter Juan Gallego paints images that are technically floral paintings, though they are unlike any I have seen.

Gallego takes his inspiration in close-ups of flower forms that are convoluted, multi-layered and often have a wrinkled or withered appearance.

These are the basis for his large scale compositions (it’s instructive to see a photo of an exhibit to get sense of their size), that border on abstracts. but retain their recognizable forms.

He apparently uses photographic reference, and deliberately plays with the illusion of focus in areas of his canvasses, giving them both depth and and compositional structure, demanding that your eye find his intended center of interest.

Gallego often provides several detail images to accompany the paintings he posts on his blog, in which you can see the painterly handling of the surface, something that would be hard to see in the smaller images. Also, most of the images in the blog, including the detail images, can be clicked on to see a higher resolution version.

He doesn’t seem to update often, but there is enough on the blog to get a good feeling for his work. In the image above, the whole composition at the top shows its painterly characteristics in the detail below it, which is taken from the right hand side of the painting, about a third of the way down. 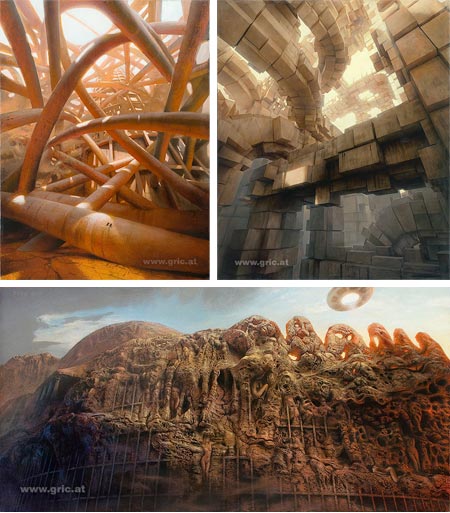