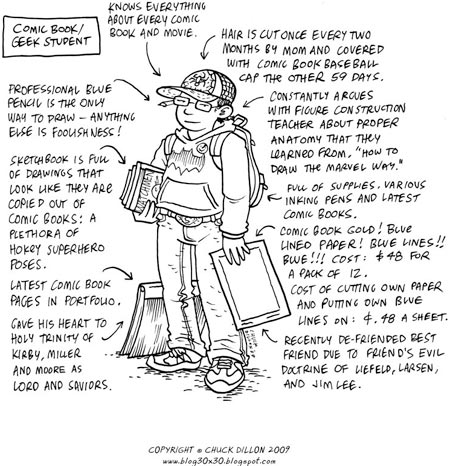 Cartoonist and illustrator Chuck Dillon, who teaches at the Hussian School of Art here in Philadelphia, has condensed some of his observations about students over his 10 years of teaching, and produced cartoon drawings/infographics of 20 student “types”.

Inspired in part by Daniel Clowes Art School Confidentaial, a graphic story (made into a movie by Terry Zwigoff) that did a bit of similar classification of art students, Dillon came up with 20 classifications, like Student 1.0, the Anime Student, the Snob/Fine Art Student, the Mom Student, the Comic Book/Geek Student, etc.

You may be disinclined to identify, as most of his characterizations are negative and drawn from the inevitable frustrations of a teacher who is trying to communicate something through the barriers people often erect in the name of identity, but it’s amusing to see his take on them.

Personally, I found it difficult to identify for another reason. Enough years have passed since I was in art school that many of his types don’t resonate with me, largely because the social/pop culture phenomena to which they’re tied (anime, metal, gaming) didn’t exist at the time. Other types with which I might have identified (60’s counterculture types) no longer apply. Also I went to a different kind of art school, Hussian is a small commercial art school, a sharp contrast in some ways to the medium sized fine arts academy that I attended.

Still some things are universal, and even though we all know it’s not a Good Thing to classify people by their appearance, it’s fun to sort into “types”.

The rest of Dillon’s blog varies from posts about his process to train sketches to various finished and unfinished projects, like his Philadelphia Zoo Annual Report Comic Strip. Dillon also has a web site which showcases some of his other work.

Link: http://blog30x30.blogspot.com
Which Student are You?
Web site

2 Replies to “Which Art Student Are You?”