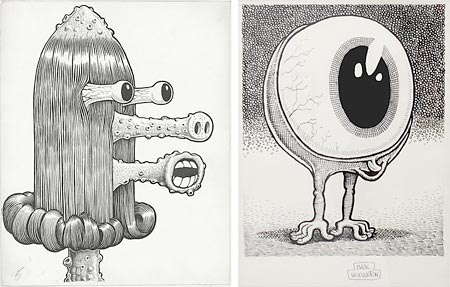 The wonderfully demented art of Basil Wolverton, a cartoonist who helped put the “Ugh” in ugly and the “Gross” in gross-out with his work for Mad Comics (later Mad Magazine) in the 1950’s and 60’s, will be on display at the Gladstone Gallery in New York From June 20 to August 14, 2009.

The gallery has a selection of his work online that inclides pieces from many stages of his career, from early, more innocent cartoons, to the gross-out “Beautiful Girl of the Month” that made his reputation, to the apocalyptic Bible illustrations to which he devoted his later career.

There is a review of the show in the New York Times.

For more, including links to more of his art on the web, see my previous post about Basil Wolverton.

Cowboy Artists of America is an organization devoted, in the words of the founders:

To perpetuate the memory and culture of the Old West as typified by the late Frederic Remington, Charles Russell and others;

To insure authentic representations of the life os the West, as it was and is;

To maintain standards of quality in contemporary Western art;

To give mutual assistance in protection of artists’ rights;

To conduct a trail ride and campout in some locality of special interest once a year;

To hold an annual joint exhibition of the works of active members.

It is in the section of the organization’s web site devoted to the latter that you will find images of their work, in oil, water media and drawings, as well as dimensional works. Here is a link to the 2008 Awards, others are listed in the sidebar.

There are also selected works, usually one or two, shown with the members’ bios.

In my quick tour of the site, I found a number of artists that bear further investigation individually, but here is a nice opportunity to see them as a group.

This year’s 44th Annual Show will be at the Phoenix Art Museum in October. 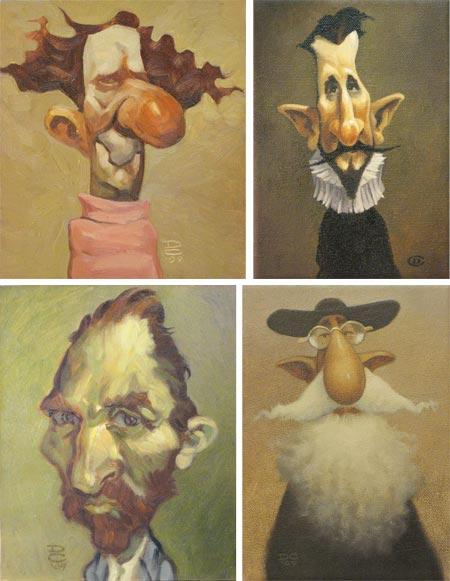 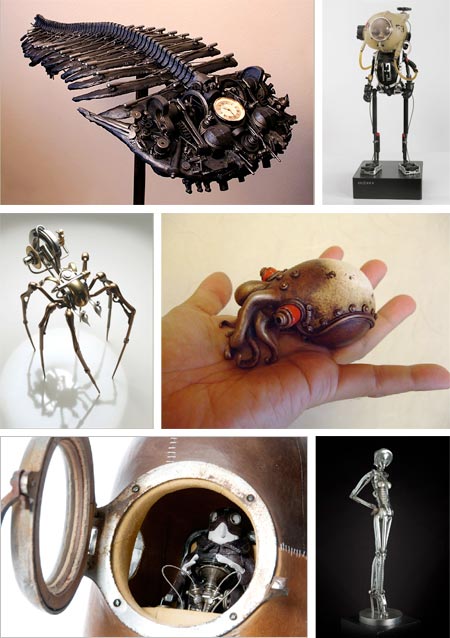 You will sometimes hear people argue about the most important events in human history — the discovery of fire, the wheel or the printing press, the first cave paintings, or, in a longer view, the first deliberate cultivation of plants or the rise of cro-magnons and the apparent extinction of the neanderthals.

But, as a friend of mine, paleo artist Bob Walters, pointed out, and on reflection I think I have to agree, if you truly take the long view, you could make a case that there are basically three really important events in the entire three and a half billion year history of life itself on this planet:

– Life emerges from the sea and establishes itself on land.

– Life leaves the surface of this planet and travels to another celestial body.

Some of us alive today were witness to that third event.

I was in my girlfriend’s den, watching the Apollo 11 mission with her and her younger brother on a small, round cornered television screen in black and white. I knew it was very cool, and pretty important. I didn’t realize how important. I don’t think a lot of people, even those who saw it, realize still just how important it was.

Some may argue that space exploration is a wasteful extravagance and unimportant to day to day life on Earth, and I’m sure those same arguments could be made that life in the primordial oceans was doing just fine without bothering to crawl up on the land, thank you very much, and human beings were fine living in Africa, Europe and Asia without bothering with the American continents.

I’m not so much bringing this up to argue the case (there are plenty of political or even science blogs where that can be argued ad infinitum), but rather to point out how important I personally think this event was, how much I am in awe of it, and how astonished I am that it occurred in my lifetime.

Which brings us, as always on Lines and Colors, to art.

There have been many landscape artists throughout the history of art, whether they were called that or not (see my post on Giovanni Bellini, for example), but we now have a artist who is the only one to paint the landscape of another world from first-hand experience.

Alan Bean was an astronaut on the Apollo 12 mission, launched four months after the landmark Apollo 11 mission, and was the fourth human to step foot on the moon.

Bean retired from NASA in 1981 and devoted himself full time to painting. He had been interested in painting, and taking art classes, since his days as a test pilot, and studied by making copies of paintings by Cezanne and Degas.

While he obviously couldn’t paint “on location” on the moon (en plein vacuum?), he is the only painter who can paint it from the experience of seeing it with his own eyes, and he has done so in an extensive series of paintings.

Some of them are very direct and observational. In others, like most artists, he is interpretive, and beings his own sensibilities to the subject. In particular he follows his desire to bring color to the moon, which seemed to him at the time visually richer than photographs could convey; the latter usually showing grey and black vistas of mountains, craters and dust, broken only by the color of the astronauts themselves and in particular the bright foil skin of the landing module.

In some of Bean’s interpretations, the lunar surface itself is aglow with impressionistic colors. He also uses heavy surface textures in many of his paintings, particularly in images of his fellow astronauts, and often revisits the same theme with varying degrees of color and texture.

His web site contains a series of galleries. Site navigation is horrible, but if you click around long enough you’ll eventually find your way through them. Be sure to click on the image previews, and then on “Large image” to see the textural surface of the paintings.

While Bean may not have made it into the National Gallery of Art, his paintings are on display at another part of the Smithsonian, in the National Air and Space Museum. The show Alan Bean: Painting Apollo, First Artist On Another World opens today and runs to January 13, 2010.

Link: www.alanbeangallery.com, galleries
Alan Bean: Painting Apollo, First Artist On Another World, to 1/13/10
Astronaut Goes From Walking on the Moon to Painting It (NYT)
Alan Bean bio on Wikipedia
Remembering Apollo 11 on The Big Picture 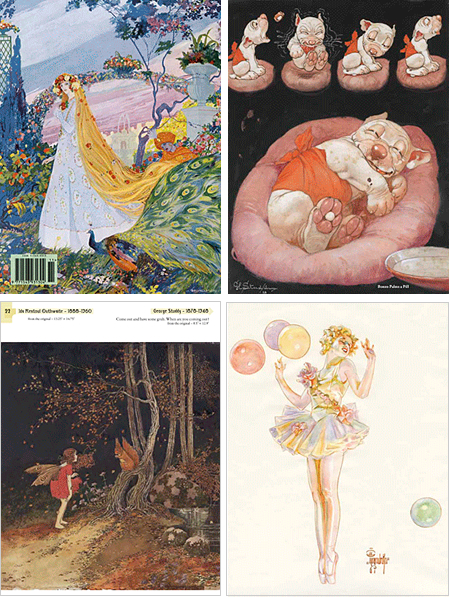 I’ve pointed this out before, but it’s worth mentioning again. Lovers of beautiful illustration, and classic illustration from the “Golden Age” in particular, will tell you that computer monitors, for all of their glowing, zillions of colors brilliance, fall behind print when it comes to viewing images. (Seeing the original drawings or paintings in person is always first, of course).

You can get used to viewing images on the screen; and unless you stop and compare, you can forget that computer screens are low-resolution!

Images in print are created by a process in which the tiny dots of color that make up the image are packed 300 per linear inch (2.54cm), or “300dpi”, while even the highest resolution computer monitors in common use display images as somewhere between 100 and 110 pixels per inch (ppi).

If you can find an onscreen image the same size as a printed image and can hold them up together, you’ll see the difference. When it comes to crispness, sharpness and detail, print wins.

I bring this up because I’m reminded how beautiful classic illustration is in print when ever I open a copy of Jim Vedeboncoeur’s ImageS (see my previous post on The Vadeboncoeur Collection of ImageS).

ImageS 11, which just brightened up my mailbox, and my day, is no exception.

ImageS goes beyond even the normal high-resolution methods of ordinary color printing and uses screenless stochastic printing, in which the dot pattern is rendered imperceptible, giving you an image that the closest you will get to viewing the original art by way of magazine or book format reproduction.

In addition, 30 of the reproductions in this issue were reproduced directly from the original art, not from the printed illustrations.

This issue is guest-curated by Susan McKinsey Goldberg and features work from the collection of Susan and Eric Goldberg. It continues the ImageS tradition of showcasing great classic illustrators, well known, lesser known and even unknown, including three previously unpublished paintings by J.C. Leyendecker, and beautiful works by Edmund Dulac, Kay Nielsen, Willy Pogany and more.

The page for ImageS 11 features a small animated-GIF slideshow that doesn’t at all do justice to the real images, but gives you a small notion of the variety of artists and styles.

Images 11 is 44 pages of cover-to cover great illustrations, most full size at 9″ x 12″, on 100 lb coated stock magazine format for $25 ($27.50 USD outside the US); less expensive and more beautiful than most of the illustration books you’ll find at Borders or Barnes & Noble, as if they’d even have a clue who these amazing artists are in a typical bookstore (small independent booksellers excepted, of course).

Worth noting: they only printed 2,000 copies.