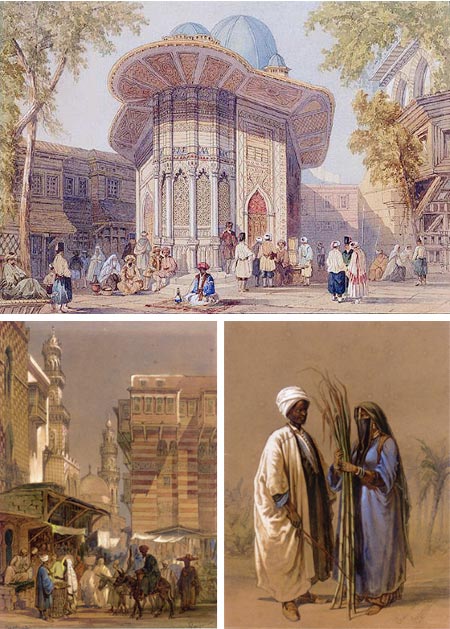 In the 19th Century a number of European artists, and many American artists, traveled to destinations in what we in Europe and the U.S. would now call the “Middle East”, staying for months or even years, returning home with paintings of exotic cities, landscapes and costumed figures that were immensely popular (see my post on Jean-Léon Gérôme, for example).

Amadeo Preziosi, who was born in Malta (a group of islands off the coast of Sicily, you know, where The Falcon came from), did more than visit. He became enamored with the Turkish city of Istanbul (at the time still called Constantinople), and stayed past his intended visit of two years, settling there for the remainder of his life.

In addition to his paintings and sketches of the streets an people of Istanbul, Preziosi had traveled in Europe during his art training in Paris and Italy and a remarkable sketchbook, filled with his beautiful watercolor sketches of his “Grand Tour” of Europe in the mid 1870’s, is going up for sale at Bonhams in London.

Preziosi’s wealthy and titled father, who never approved his artistic endeavors, was even less happy with his son settling in Turkey, and entreated him to return to Malta, but he never did.

Preziosi’s paintings sold well in Instanbul, both to local buyers and travelers, and unlike his contemporary “Orientalist” painters, he never needed to return to Europe to sell them.