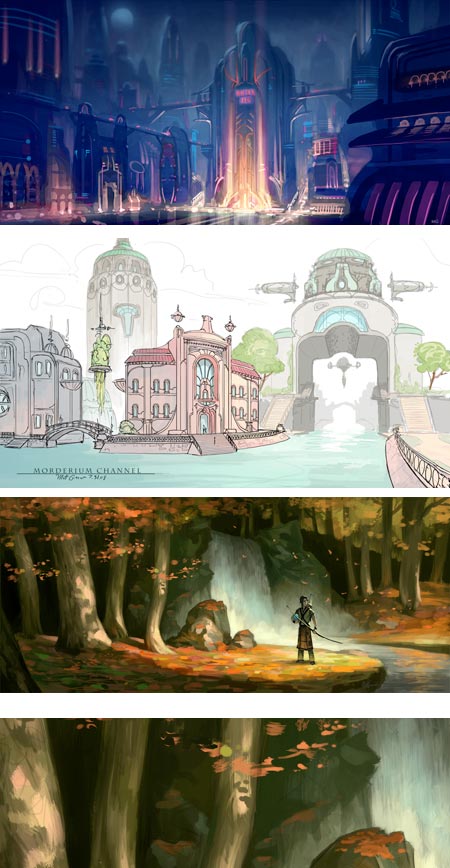 When I first wrote about Matt Gaser back in 2007, I remember being impressed, but when I recently revisited his site I was knocked out.

Gaser is a concept artist and art director for the film industry, though his previous work includes art for gaming companies. He has worked for companies like Electronic Arts and Sega Studios, and is now with Lucasfilm Animation.

Since my previous article, Gaser has completely redone and expanded his web site, and has been maintaining a blog.

Gaser works digitally, painting his images in Photoshop, but the term I keep wanting to apply to his approach is “painterly”; though not in the sense of working in a manner that emulates traditional brush strokes, (as is possible in digital painting); Gaser paints in a way that is fundamentally digital, with strokes of color (often translucent) that are quite unlike traditional brushstrokes in many ways. I use the word “painterly” in the sense that the strokes of color are visible components of the painting. They impart texture and surface variation that contribute to the character of the image in a way analogous to paint strokes on canvas.

Gaser’s loose, but highly accurate application of color, and his wonderfully developed sense of color and value relationships, give his concept paintings, which are basically meant as a guide for filmmakers and game designers in composing the final animated images, a degree of visual interest that makes them stand on their own.

He has a nice balance of quickly noted passages, often in the form of atmospheric backgrounds, with just the right touches of detail, harder edges and sharp contrasts. It gives his images a feeling of dimensionality and compositional strength that I find particularly appealing.

In addition to selections of professional work, his is new web site includes sections of personal work, plein air painting, sketches, doodles and sculpture. Be sure to note that most of the galleries have multiple pages, accessed by numbered links at bottom right.

The Projects section promises that work from his most recent projects, Star Wars: The Clone Wars and Blue Mars will be added soon. I’m looking forward to that, but in the meantime, you can find some work from the Blue Mars project (image above, middle) on his blog.

Also on the blog, you will find mention of another recent project, an as yet unpublished book called In the Between, illustrated by Gaser and written by his mother, Sandy Gaser.