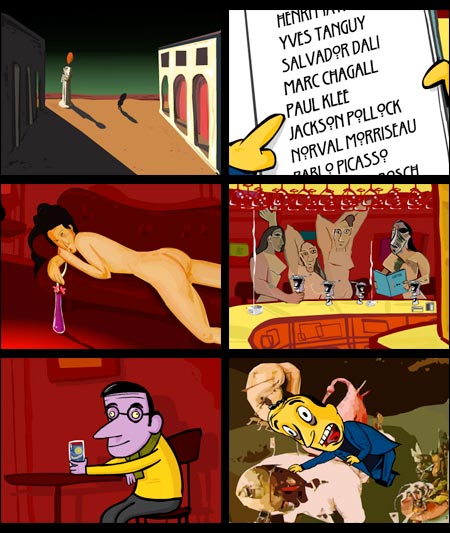 One of animated films that I discovered through Irene Gallo’s Saturday Morning Cartoons listing (see my previous post) delighted me in particular, Kunstbar, by Steve Whitehouse and a group of associates that call themselves The Petrie Lounge. The group includes Denis Gonzalez, John Halfpenny, Chris Labonte and Paul Teglas.

“Kunst” is the word for “art” in German, Dutch, Norwegian, Danish and Estonain. The Kunstbar we encounter is apparently on a side street off one of Giorgio DeChirico’s perspective defying plazas, and is frequented by artistes whose taste in drinks is, um… interesting.

The menu consists of drinks named after artists, a common enough practice, but here the Petrie Lounge crew has taken that idea literally and the drinks are in the spirit of the artist in more than name. Our intrepid protagonist, apparently a dedicated art lover, tries several, much to his detriment and our amusement.

This stylish animated short is a delight for lovers of art and animation alike, so stop by the Kunstbar for a short one.

Oh, and don’t order the Bosch.