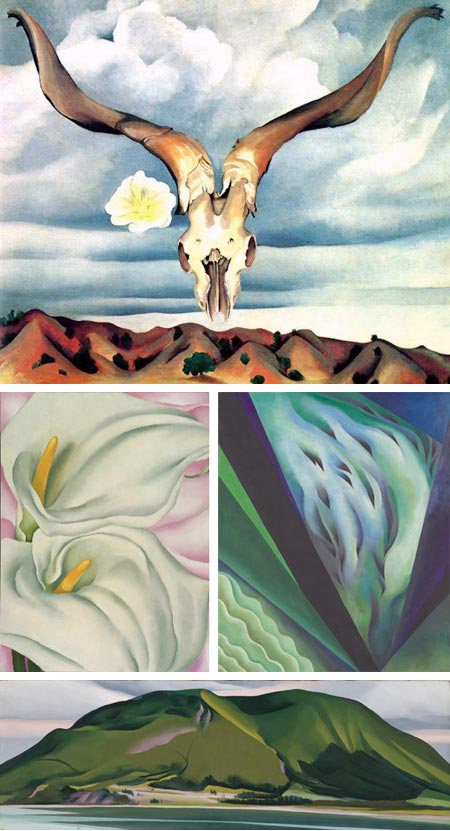 Though she had been given art lessons at home as a child, and followed a desire to be an artist into studies at the Art Institute of Chicago and The Art Student’s League in New York, where she studied with William Merritt Chase (see my post on William Merritt Chase), Georgia O’Keeffe stopped making art soon afterwards, frustrated with her work and direction in pursuing realistic painting.

Four years later she encountered the artistic philosophy of Arthur Wesley Dow while taking a summer course for teachers at the University of Virginia, whose novel ideas insisted that the artist should create based on elements of color and line and the artist’s own inclinations rather than emulating nature. Freed from the constraints she felt in her academic training, she began to reinvestigate the possibilities of art.

A couple of years after that she produced a series of charcoal drawings that a friend of hers brought to the attention of renowned photographer and gallery owner Alfred Steiglitz, and the drawings were exhibited in Steiglitz’s New York gallery without O’Keeffe’s knowledge.

Steiglitz proceeded to convince O’Keeffe to move to New York and pursue painting full time. Steiglitz and O’Keeffe married several years later and were one of the most celebrated artistic collaborations of the 20th Century. Steiglitz produced a remarkable body of portraits of O’Keeffe over the course of their life together and was an indefatigable supporter and promoter of her work.

In New York, O’Keeffe painted large scale canvasses of flowers (for which there was much speculation of sexual suggestion in the imagery), saying later, “I decided that if I could paint that flower in a huge scale, you could not ignore its beauty.”

O’Keef begain spending her summers in New Mexico, producing works inspired by the desert landscape and the light and color of the southwest, along with still lifes and other subjects that reached across the boundaries of representational and nonrepresentational art.

O’Keeffe received both popular and critical acclaim in her lifetime and remains one of the major figures of 20th Century American art.

If you get a chance to see her work in person, you will see how her approach and her use of scale can do one of the things art does best, encourage you to stop and look at things with fresh eyes.

There is an extensive list of museums with her work in their collections on Artcyclopedia.

[Thanks to Bram from Raised by Squirels for correcting my major “O’Keefe” (one “f”) typo, title and everything.]