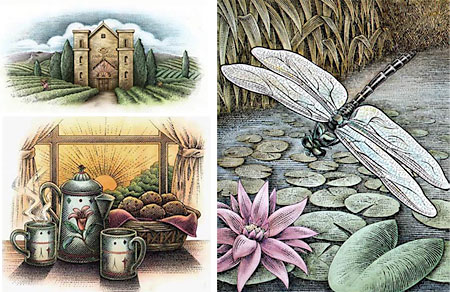 In a way somewhat analogous Franklin Booth’s unintentional pen and ink imitation of engraved illustrations in the books of his time (the result of innocent ignorance of printing processes), contemporary illustrator Peter Siu deliberately uses pen and ink to emulate the visual charm and delicate detail of wood engravings.

Though the process is reminiscent of older illustrations, Siu brings a modern sensibility to his illustrations and attains a feeling of timelessness.

His style lends itself well to product images, advertisements, map graphics and editorial illustrations where the authority of old world engraving and the contemporary flair of modern illustration give both weight and brightness to the subject.

His web site includes a gallery of illustrations in various categories.

You can also view Siu’s work on Workbook, Serbin Directory of Illustration and Martha Productions. 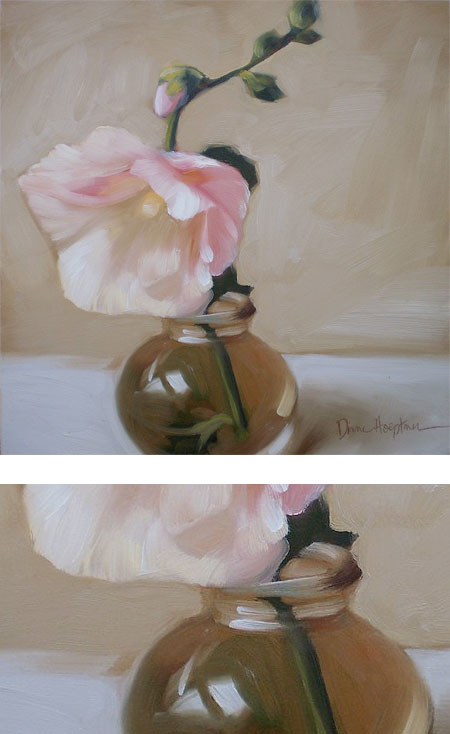 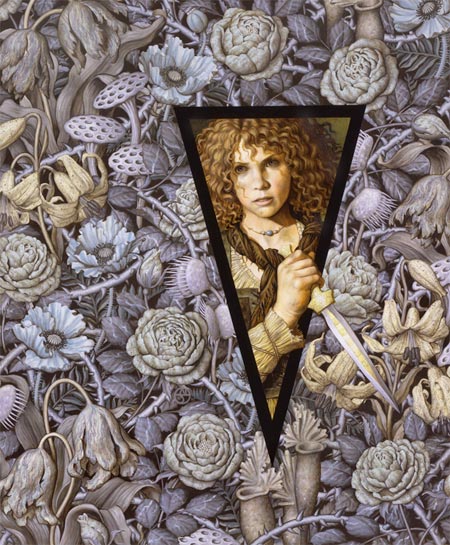 Jody A. Lee is a New York based artist and illustrator, best known for her work in the field of fantasy illustration.

Originally from San Francisco, Lee studied at the Academy of Art College there, majoring in Illustration.

Her work, done in oil on canvas or acrylic or oil on illustration board, often includes decorative motifs incorporated with the representational images, sometimes done with metallic gold or silver paints.

Her images are frequently rendered with a high level of detail and attention to visual texture, which can make an effective contrast against the more graphic decorative elements.

Her web site includes a Portfolio of illustration and a Gallery of paintings, drawings and sketches.

I found the pop-out thumbnail navigation awkward and not conducive to browsing. Fortunately, when in the Portfolio section at least, there is an option under the main images for “Quickreference” which gives access to an easier to browse thumbnail page. Be sure to click on the main images for the larger versions.

There is also a section of Portraits and a page describing her media and methods.

Norwegian symbolist Edvard Munch is another of those artists, like Whistler or even Hokusai, whose oeuvre is condensed to a single image in the minds of most people, in this case his iconic image The Scream.

There are actually several versions of The Scream, including both paintings and prints, more than one of which have been the target of high-profile art thefts (later recovered).

The theme of suffering and mental anguish carried through much of Munch’s work, however.

His formative years were marked by a father who was fanatically religious and obsessed with sorrow and death. His Mother and beloved elder sister died of consumption, now known as tuberculosis, when Munch was five and fourteen, respectively; and one of his younger sisters developed a mental illness at an early age.

Munch himself was a sickly child, often in bed for long periods where he would draw to keep himself amused. In addition to religious subjects, his father schooled Munch and his remaining children in literature, including frequent readings of ghost stories and the work of Edgar Allen Poe.

The expressions of anxiety, unhappiness, fear and grief resonated with those who viewed his art, and he became a widely sought out and influential artist, beyond his native Norway and particularly in Germany, where he lived and worked for many years.

He was one of the founders of the Expressionist school, in which color, line and the delineation of recognizable objects are distorted at will for emotional effect; often, as in Munch’s case, centering on anxiety, fear, despair and spiritual angst. As in many expressionist works, the dark emotional tone is often belied by a palette of intense colors.

Not all of his works are as negatively charged or emotionally dark as his signature pieces, many are more straightforward and representational, and in his early years, even impressionistic.

There is a series of galleries on edvard-munch.com that gives a good overview, arranged by subject. edvardmunch.info has a list (no thumbnails, but links to images) arranged roughly chronologically.

In addition to his work as a painter, Munch was a printmaker and created etchings, wood engravings and lithographs. There is an exhibition of 40 prints that will be at the National Gallery of Scotland from 19 September to 6 December, 2009. The exhibit is from from the Munch Museum in Oslo, which is dedicated to his prints.

In his paintings, Munch was concerned with the effects of color, and the way one’s perception of a scene could change with time of day or emotional state; saying: “The fact is that at different times you see with different eyes. You see differently in the morning from in the evening. The way in which one sees also depends on one’s mood…”

Long time readers of Lines and Colors will know that I have a particular fondness for pen and ink drawing; a medium with a long history and many great practitioners but one that is assigned little glamour in this day of inexpensive color reproduction and computer imagery.

Melissa B. Tubbs is an Alabama based artist who takes inspiration in the woodcuts of Albrecht Durer and the traditions of past pen and ink artists, an finds particular delight in the patterns of light and shadow created by sunlight cascading against the details of architectural forms.

Her pen and ink drawings are rendered in textures and tones created in finely detailed crosshatching, used in places almost like washes. She utilizes them to give her architectural elements visceral textures of stone, brick, wood siding and other building materials. She also has a nice feeling for the textures of bark and leaves, flags and drapery and cloth awnings.

As you browse back through her blog posts, be sure to click on the images for the larger versions. Some of the older posts, in particular, feature linked images that are large enough to get a feeling for her hatching technique (image above, with detail below: Hunt Memorial, NYC).

Tubbs is represented by the Stonehenge Gallery in Montgomery, Alabama; and her drawing of Carnegie Hall in NYC will be featured in the drawing collection Strokes of Genius 2: Light and Shadow, by Rachael Rubin Wolf, to be published in October.

Zimmer also publishes Illustration magazine, which focuses on classic illustration. For some bockground on both magazines, see my post from 2007 on Illustration Magazine and Illo.

After an all-too-long hiatus, Illo is back with a second issue, even stronger than the first. This issue contains in-depth, lavishly illustrated (I love that term) articles on four terrific illustrators; three of whom I’ve featured previously on Lines and Colors: Michael Cho, James Gurney, Nancy Stahl and Zina Saunders.

It’s hard to convey how beautiful issues of Illo and Illustration are without seeing them; but I’ll point out again that, as nice as images like these can look on screen, computer monitors are low resolution compared to print, and print is where these illustrations look best.

It’s also hard to get across how wonderfully in-depth these articles are, and how astutely Zimmer provides a cross section and historical perspective of each artists work. It’s like having a mini-book on each of these four illustrators (for $15 U.S. – a steal).

There is a set of thumbnail images on the Illo site that gives you a small glance at all of the issue’s pages. There is also a nice video flip-through of the entire issue on James Gurney’s site (for which YouTube has unfortunately disabled the sound for some arcane reason known only to their coven of lawyers).

You may be able to find Illo at your local independent bookstore, many finer comics shops and some of the chain bookstores. You can also order it directly online from the publisher.