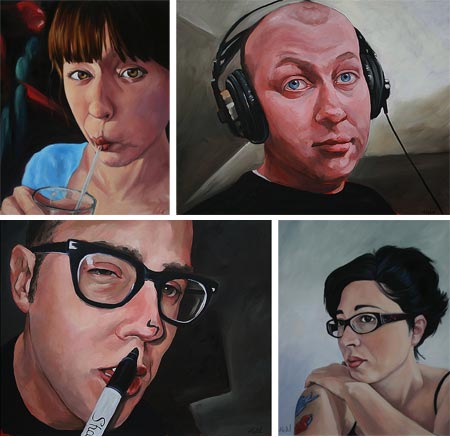 When people choose a photo (or series of photos) by which to represent themselves on a social networking site like Facebook, they are, in a way, making a self portrait, their choice influenced by their perception of themselves.

This is one of the interesting aspects of Matt Held’s Facebook Portrait project, in which he paints portraits of people from their Facebook Profile photos.

Individuals can essentially submit their photos for consideration by joining the “I’ll have my Facebook portrait painted by Matt Held” Facebook group, from which Held selects his subjects based on his own criteria for interesting portraits.

Held moved from Seattle to NYC with the intention of establishing himself as a portrait artist, but found himself struggling and creatively blocked. At one point, he was having difficulty achieving the kind of skin tones he wanted and, as an exercise, started a painting of his wife from her Facebook photo.

His wife suggested that he look into working with other Facebook portraits, and the project, and Facebook group, was initiated. The portraits are not commissioned, and the “sitters” whose photos are chosen as subjects just get a digital image of the painting, though they can buy the painting as they would a gallery piece.

The paintings themselves will be gallery pieces, some of which will be exhibited in an upcoming solo show, though I don’t have the details on when and where.

Held’s goal for the project is 200 portraits, which he estimates will take about two years to complete. The project has garnered a bit of media and net attention, and the Facebook group is up to over 8,000 members.

Held’s painting approach is very straightforward. He works in oil with brusque brushwork and a deliberate application of color (and he seems to be working out his issues with skin tones). There is no attempt to flatter, he approaches the paintings as paintings.

His choice of subjects has given him a rich source of odd poses, expressions, costume and quirky compositions, though it’s difficult to say how much of the latter is from the source photos and how much is Held making his own compositional choices.

(As a side note, it’s interesting to compare Held’s internet based source of subjects with another project, Bill Guffey’s Virtual Paintout, in which any number of artists use Google Maps Street Views as subjects for paintings.)

Held has a blog, in which he discusses the project and the individual pieces. The blog includes a FAQ about the process. The images on the blog are small, however, and the main gallery of images is on the Held Studios web site.

There is also a video by Radar Nine on Metacafe in which he discusses the project.