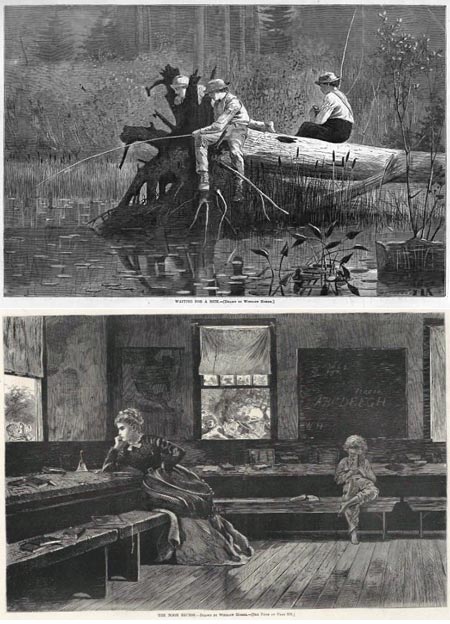 Those in the art establishment who like to rewrite art history, or simply ignore it, in the defense of their position that illustration is somehow “not art”, conveniently ignore the number of well known artists who also happened to be illustrators.

A case in point is Winslow Homer, widely regarded to be one of the most prominent American artists and renowned as a master of watercolor, whose career as an illustrator is largely glossed over.

Homer worked for over two decades as an illustrator and visual journalist, reporting from the front lines of the Civil War and portraying more bucolic domestic scenes for popular periodicals like Harper’s Weekly.

His powerful and sensitive drawings, full of sunlight and shadow, emotion and atmosphere, were captured for print in astonishingly intricate wood engravings made by professional wood engravers (who are unsung artistic marvels to my mind), who reproduced the artist’s drawings with a beautiful range of tones made from delicate linework.

Wood engraving is a process that takes the age-old concept of woodcuts a step further, using harder wood and cutting into the end grain instead of the normal block surface. That and the use of tools initially developed for metal engraving, notably the burin, made for a super-fine line that gave an almost photographic appearance.

Homer’s wood-engraved illustrations are the focus of Winslow Homer: Illustrating America, an exhibition organized by the Brooklyn Museum (and taken largely from their collection) and currently showing at the Jersey City Museum in New Jersey.

The exhibition runs until December 23, 2009, and is accompanied by a complimentary exhibit called Hudson Views: A Celebration of the River that features wood engraved illustrations by other artists from similar periodicals.

There isn’t an online gallery for the exhibition, but you can view many of the illustrations in the Brooklyn Museum’s collection.

As these illustrations were mass produced, many are available from dealers in prints and etchings. I’ve listed a few other resources below.