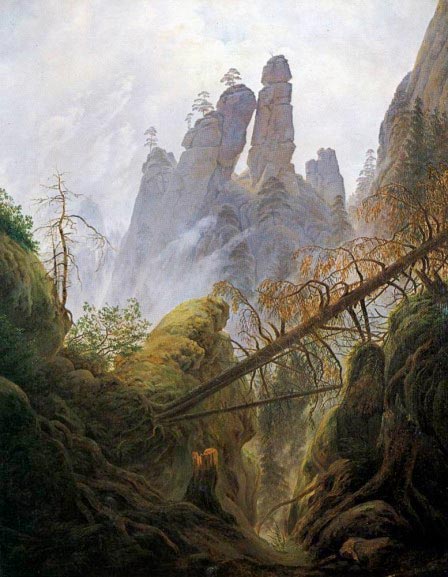 Since I wrote my post about the great 19th Century German landscape artist Caspar David Friedrich back in 2006, many additional resources for viewing his work have appeared on the web; and there is a new exhibition of his work, Caspar David Friedrich — Nature Animated along with a complimentary exhibit, Friedrich, Eight Contemporary Commentaries at the NationalMuseum of Sweden (to 10 January, 2010).

Sadly, some of Friedrich’s work was lost in the Allied bombing of Dresden during World War II, though some of that has been recreated in interpretations from black and white photographic records by other artists in subsequent years. (Unfortunately, displays of his work are not always quick to point out which pieces are recreations, and I’m not the one to give you guidance on that point.)

Friedrich was a prolific artist, however, and there is finally an abundance of web resources to view his work as he regains popularity with contemporary art lovers. His popularity waxed an waned during his own lifetime. Friedrich had success in the early part of his career, but fell into disregard and even disdain in the latter part of his life, a life that was marked by tragedy of various kinds almost throughout.